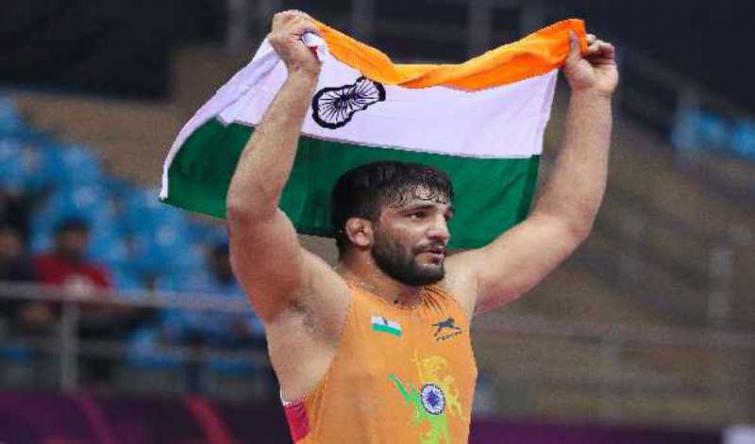 Sunil with his comprehensive defence was able to keep Salidinov at bay for most of the bout.

Salidinov didn’t have an answer to the strategy of Sunil and finally went down pretty easily at the KD Jadhav Indoor Stadium here.

Earlier, Sunil on his way to the final made an impressive comeback in the semi-final bout against his Kazakh opponent Azamat Kustubayev. He came back from 1-8 down to win the bout 12-8.

This was an improvement for Sunil from his 2019 performance in the same tournament where he won a silver medal.

"I am feeling happy to have earned India’s first Gold Medal today. I have worked really hard on my ground techniques and it feels good to have done better than my last year’s performance," Sunil said after the win.

Arjun started the bout slowly and was down by 1-4 in the first period. But, Arjun didn’t give up and came back strongly snatching six straight points with a combination of good defence and attack.

The final score at the end of the bout was 7-4 in favour of Arjun.

However, India’s third medal hope Mehar Singh (130 kg) suffered a setback as he lost his bout against Roman Kim of Kyrgyzstan by a narrow scoreline of 2-3.