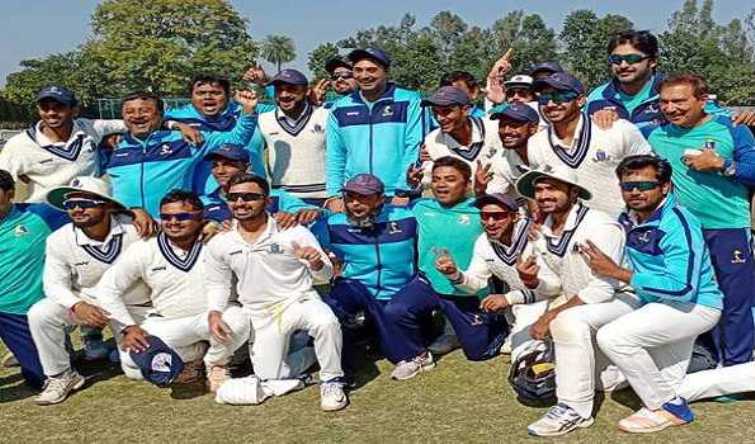 Kolkata/UNI: Bengal booked their place in the quarterfinals from the Elite Group A & B after dramatic 48-run victory over Punjab in the Round 9 play at Dhruve Pandove Stadium in Patiala today, thanks to former captain Manoj Tiwary's two successive half centuries and Shahbaz Ahmed's record 11 wickets haul in two innings.Thirty-five-year-old right handed batsman Manoj Tiwary, who scored an unbeaten triple century against Hyderabad last month, was declared player of the match for his 73 not out, and 65 in thesecond innings at Patiala.

Left arm orthodox spinner Shahbaz Ahmed ( 25) who is on his deadly form, finished with 11 wickets conceding 101 runs in both innings. His 7 for 57 in the first innings forced Punjab to bundle out at 151 despite at one stage the hosts were 93/3 while chasing Bengal innings of 138 all out.

Bengal's outright win happened at Punjab courtyard despite trailing by 13 runs in the first innings, a similar successive triumph for Bengal after they beat Rajasthan in previous play.Bengal now took top slot in the table from this Elite Group with 32 points from 8 plays, followed by Gujarat 29 and Sourastra from seven plays each.

Gujarat and Saurastra already made to the quarter final stage and Goa from other group.Electing to bat Bengal made 138 runs all out in first innings and restricted Punjab to 151.In the second knock Bengal scored 202 on deadly uneven turf and made Punjab all out at 141 in 47.3 overs.

Pacer Akash Deep for Bengal finished 5/47 as Shahbaz Ahmed and Deep shared 16 wickets of Punjab between them.

Shahbaz Ahmed's seven-wicket haul saw to that as he kept Punjab to a mere 13-run lead over Bengal's 138 all out.

" My heartiest congratulations to the Bengal Cricket Team." he said.

" One might think that it is expected that Bengal should reach the KO stages. But, it is the way they fought back to get the QF slot which is important. Winning back to back games in difficult situations, despite all adversities (rain, bad light, etc) so far, showed a lot of character. Hope they go a long way in the Tournament," Mr Dalmiya said in a statement .