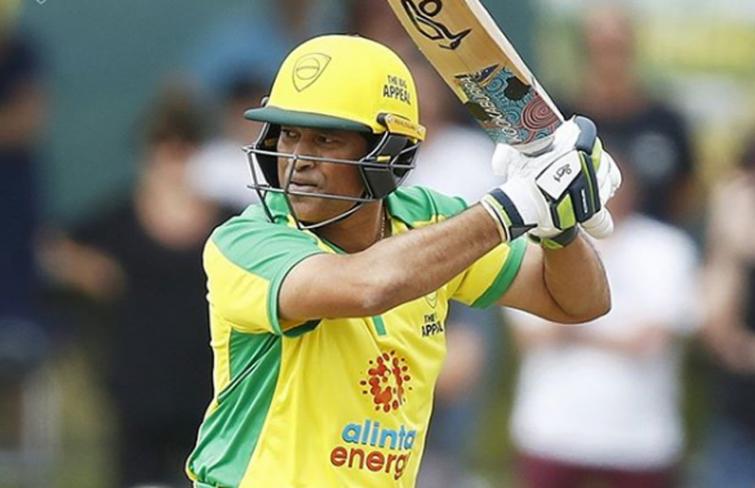 Sachin Tendulkar picks up his bat again, hits a boundary in the first ball

Melbourne/IBNS:  The cricket field on Sunday witnessed yet another nostalgic and rare moments when iconic cricketer Sachin Tendulkar picked up his willow for an over where he showcased his old charisma against 2019 Women’s Cricketer of the Year Ellyse Perry.

After announcing his retirement from cricket in 2013, Sachin had played an exhibition match for MCC in 2014.

However, this was once again for a special cause when he faced Perry for an over during an innings break during Sunday’s Big Appeal double-header.

Giving his fans to salute his cricket skills, Sachin glanced the first ball to the boundary.

Apart from this event, cricket lovers also cherished a special exhibition match, which was played between Ponting and Gilchrist XI.

Former international stars like Brian Lara, Wasim Akram and Yuvraj Singh joined the sides to play in the match which aimed at helping those hit by bushfires which devastated lives in Australia.

The legends turned it on, the fans came in droves, and the Bushfire Cricket Bash achieved its chief purpose – raising more than $7.7m for the communities devastated by the fires that have ravaged Australia for months, reported Cricket Australia website.

Meanwhile, Sachin Tendulkar posted some interesting picture with the other former cricket legends and captioned them as: "Competitors on the field, friends off it!Had a lot of fun coming together for a cause like the Bushfire Relief.Happy to have contributed towards the #BigAppeal."

Competitors on the field, friends off it!
Had a lot of fun coming together for a cause like the Bushfire Relief.
Happy to have contributed towards the #BigAppeal ðŸ pic.twitter.com/VpYZMteFCY