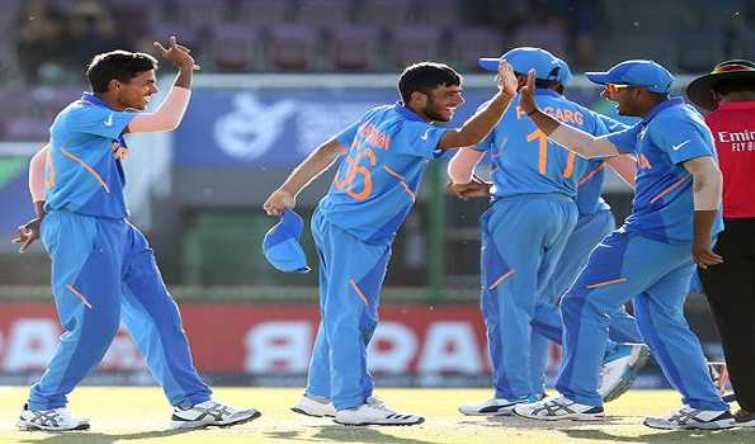 Potchefstroom/UNI: Riding on half-centuries from Yashasvi Jaiswal and Atharva Ankolekar and followed by a superb bowling spell from pacer Kartik Tyagi, India thrashed Australia by 74 runs to enter the semifinals of the ICC U-19 World Cup, here on Tuesday.

Chasing a target of 234 for victory, Australia could only manage 159 as the India colts celebrated a famous hard-fought victory.

India came out all guns blazing in the defence of their total as they struck thrice in the first over to reduce Australia to 5/3.

Australia lost their first wicket on the first ball as Jake Fraser-McGurk was run-out. Kartik Tyagi then got Mackenzie Harvey and Lachlan Hearne out on two successive deliveries.

While he was denied a hat-trick, the right-arm pacer picked up another wicket in his second over, dismissing Oliver Davies.

From there on, Sam Fanning and Patrick Rowe steadied the ship, adding 51 runs together. However, with Tyagi returning into the attack, Australia lost Rowe for 21.

Liam Scott then joined Fanning in the middle and the two managed to keep their hopes alive, stitching an eight-one partnership from 119 balls.

However, Bishnoi broke that stand in the 41st over after Scott edged one to the wicketkeeper. Akash Singh then ended Fanning’s 127-ball 75-run vigil to give India their seventh wicket.

Australia were 155/7 when Fanning got out and India Under 19 picked up the last three wickets quickly to seal a 74-run win.