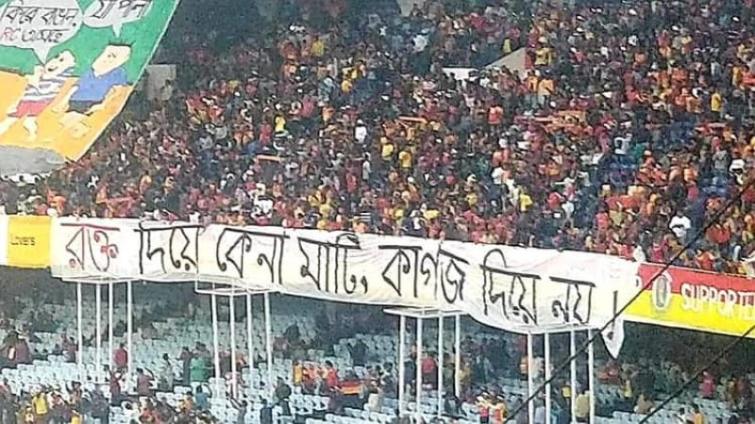 Kolkata/IBNS: Amid the rivalry on ground, the supporters of Mohun Bagan and East Bengal during an I-League Derby on Sunday united to send a message against the contentious Citizenship (Amendment) Act (CAA) at Vivekananda Yuba Bharati Krirangan Stadium here.

In a picture shared by one Tathagata Bhattacharya, the East Bengal supporters were seen unfurling a banner which read, "This land has been bought by our blood, not by documents."

The East Bengal supporters, mostly refugees, came to India from Bangladesh, which was East Pakistan before the Liberation War in 1971.

Sending out a similar message, the banner unfurled by the Mohun Bagan supporters read, "When we were here, there were no documents."

Another banner read, "Saffron Brits be warned. We taught India to fight the British. Never forget."

Several parts of the country including Kolkata have witnessed widespread protests against the CAA which aims to grant citizenship to all Hindu, Sikh, Christian, Buddhist, Parsi, Jain but not Muslim refugees who came to India from Bangladesh, Pakistan and Afghanistan before 2015.

On the field, however, Mohun Bagan had the last laugh as they went on to defeat East Bengal 2-1.