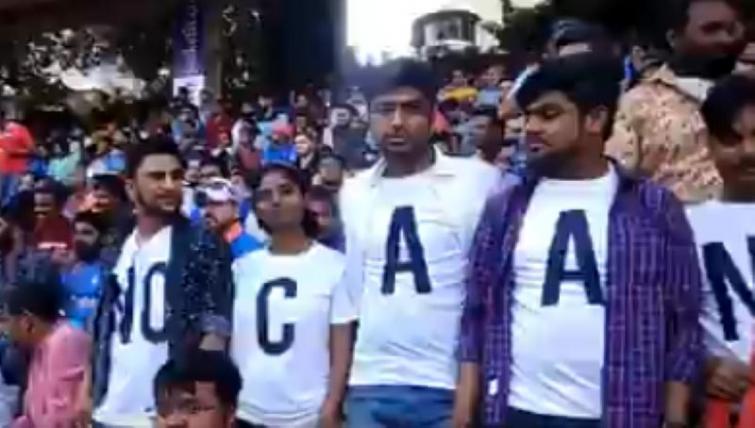 Students wearing 'No CAA', 'No NRC' t-shirts spotted during India-Australia clash in Wankhede

Mumbai/IBNS: Despite tight security checks, students wearing t-shirts with "No CAA" and "No NRC" message were spotted during the first One Day International (ODI) match at Wankhede Stadium here on Tuesday.

Though no banners and placards were allowed inside the stadium, a few students were spotted wearing the t-shirts with "No CAA" and "No NRC" imprinted on them.

Anticipating that people wearing black t-shirts will be denied entry into the stadium, the group of students wore white t-shirts with one of the letters C,A,A,N,R,C printed on them.

After receiving inputs from the Mumbai Cricket Association over the protests against the CAA, security was beefed with intense scrutiny.

"Mumbai Police has received intelligence that few groups are planning to have anti-CAA protests during the game. We were apprised of the situation and that’s why police decided that no placards, colours, banners will be allowed during the game. As far as removing black clothing is concerned, it applied only to those wearing two layers of clothing," an official has been quoted by The Indian Express.

A group in Wankhede stadium was shouting ‘No CAA, no NRC’

All the people around started chanting ‘Modi Modi’

"Modi, Modi" chant was also heard when the students were spotted by the officials in the stadium.