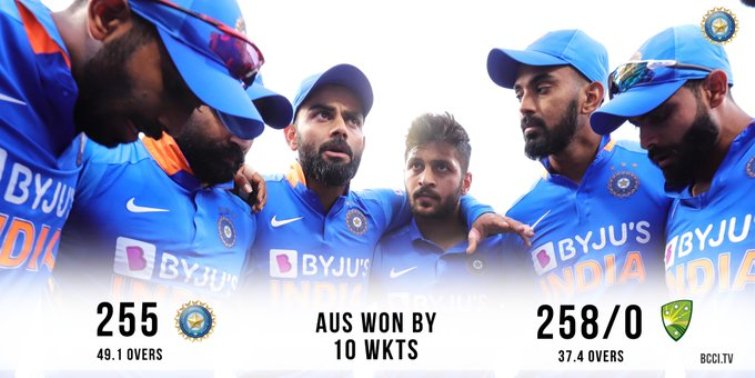 Mumbai/IBNS: David Warner smashed unbeaten 128 runs and skipper Aaron Finch contributed 110 runs not out with his willow as Australia defeated India by 10 wickets and over 12 overs to spare here on Tuesday.

Warner was ruthless in his monstrous knock when he hammered 17 boundaries and three sixes in his knock.

He guided his homeside to victory.

India had defeated Australia in their group stage match of the World Cup last year and it seems that Warner and his colleagues took sweet revenge on the Indian soil on Tuesday.

Finch hit 13 boundaries and two sixes in his innings.

Brilliant bowling performances by Mitchell Starc (3 for 56), Pat Cummins (2 for 44 ), Kane Richardson (2 for 43) helped Australia bundled out India for 255 in 49.1 over in the first ODI of three-match series at the Wankhede Stadium, here on Tuesday.

Along with the Aussie pace trio, spinners Adam Zampa (1 for 53 ), Ashton Agar 1 for 56 also bowled well to restrict India to a below-par score.

After being put into bat first by Aussie captain Finch, India were off to bad start as Rohit (10) got out early. He was dismissed by Mitchell Starc, leaving India to 13/1 after 4.3 overs.

KL Rahul came to bat after Rohit's wicket and batted sensibly with Shikhar Dhawan to take India to 45-1 after 10 overs.

Shikhar Dhawan struggled at the beginning against the new-ball bowlers but made up for the dot deliveries hitting his 28th ODI half-centuries.

Dhawan shared a 121-run partnership for the second wicket with KL Rahul. Batting at no 3, Rahul scored 47 runs from 61 deliveries before losing his wicket to Ashton Agar in the 28th over.

It was KL Rahul's wicket that triggered the India's collapse during the middle overs. India lost their 4 wickets for just 30 runs and were in a spot of bother.

Soon after Rahul's wicket, Dhawan too departed for 74, losing his wicket to Pat Cummins in the 29th over.

India skipper, Virat Kohli who came to bat at No 4 also couldn't do much and got out for just 16 while Young Shreyas Iyer (4) was dismissed by a dangerous Mitchell Starc leaving India to struggle at 164-5 after 32.5 overs.

From there on, Rishabh Pant and Ravindra Jadeja tried to building a solid stand but it ended at 49 runs after the latter fell for 25 off 32.

Rishabh Pant was the key to India's chances of making a decent total but he was also dismissed by Pat Cummins for 28 runs off 33 balls courtesy a nasty bouncer.

Shardul Thakur, who batted well in the previous series picked up a couple of boundaries against Cummins before getting out to an unplayable yorker from Mitchell Starc for just 13 runs.

In the end, Mohammed Shami (10) and Kuldeep Yadav (17) helped India post an average total of 255-10 in 49.1 over against a top-class Australian attack in Mumbai'