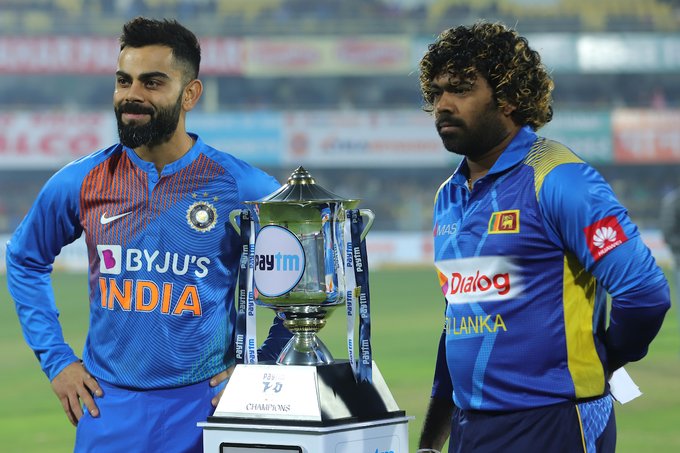 Guwahati/UNI: India won the toss and elected to field first against Sri Lanka in the first T20I of the three-match series at Barsapara Cricket Stadium, here on Sunday.

After the toss, India skipper Virat Kohli said," Looking from past records it appears that chasing will be a good option....the ground is small and in the second innings dew will be a factor”.

On the other hand, Sri Lankan skipper Lasith Malinga said, "We would won’t min batting first, hopeful to put a big score".

Meanwhile, there will be a delay in the match as it's drizzling in Guwahati. It had rained here in the morning but the weather was clear in the evening.

According to weather forecast the maximum this rain should persist is 1 hour so still there is a possibility of match with 1.30 hrs of delay.

This is India's first match in the New Year 2020. Shikar Dhawan made his place in the playing eleven in absence of opener Rohit Sharma, while Angelo Mathews the hard hitting finisher of Sri Lanka is back in the squad.

Earlier, in a pre-match press conference on Saturday, Indian captain Virat Kohli had said that he expects the game to be high scoring one and it will test the fighting ability of bowlers in a batsman friendly wicket.

India played its last 50 over match here in the same venue against West Indies which was a high scoring game which the Men in Blue won with considerable ease.