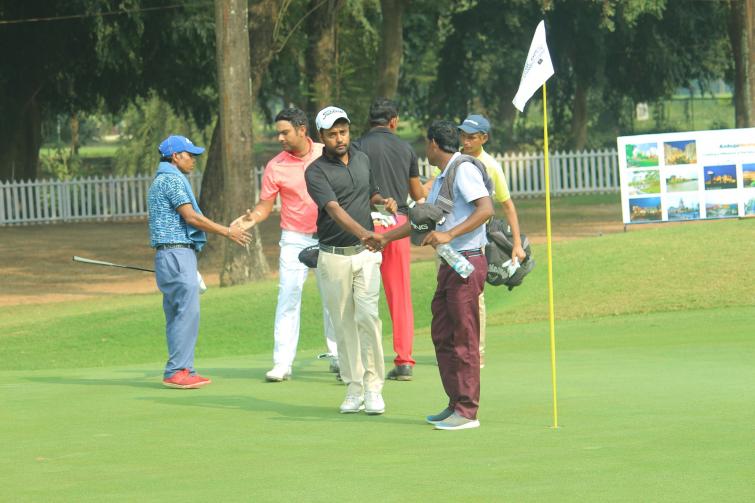 Kapil, searching for his maiden title, totaled eight-under-136 to be the halfway leader by one shot at the Rs. 40 lakh event.

Mumbai’s Anil Bajrang Mane (68) moved up one spot to second at seven-under-137 while Bengaluru’s M Dharma was the big gainer moving up 24 spots to third position at six-under-138 as a result of his tournament-best score of seven-under-65.

A fog delay of 45 minutes in the morning meant that play started at 7:15 am local time instead of the scheduled 6:30 am.

The cut was declared at five-over-149. Fifty-one professionals made the cut for the weekend.

Kapil Kumar (68-68) had an eventful day in stark contrast to his first-round effort as he drained eight birdies in exchange for four bogeys. The 27-year-old was accurate with his irons for the second straight day since he set up as many as five birdie putts from a range of six feet. Kapil, who comes from a golfing family with three of his cousins also competing on the PGTI, made his longest putt of the day, a 14-footer on the 14th.

Kumar’s chipping let him down as he conceded all of his four bogeys as a result of poor chip shots. Nonetheless, Kapil put up a resilient display fighting back with a pair of birdies each time he dropped a shot.

Kapil said, “It was an up and down day for me. I made lesser mistakes in round one but today I made more birdies so can’t really complain about today’s round. My good iron-play has been the common factor on both days.

“Importantly for me, whenever I dropped a bogey, I followed it up with two birdies which more than compensated for my errors. I was confident of my ability to score despite the few blips through the day. I knew if I found the fairway, I would hit it close.

“However, going forward, I’ll need to focus on my chipping and bunker shots which were not up to the mark today. All my four bogeys today were a result of missed chip-putts,” added Kumar, currently placed 46th in the PGTI Order of Merit.

Anil Bajrang Mane (69-68), ranked 64th in the PGTI’s money list and battling to save his card for next season, had reason to rejoice on Friday when he returned a 68 to rise into contention.

Anil, struggling in the second half of the season due to a shoulder injury, played his irons and wedges well to set up three birdie putts within four feet. He also sank two birdies from a range of 18 to 20 feet. Mane’s only bogey of the day came on his closing ninth hole.

Anil, also looking for his breakthrough win, said, “After a good Feeder Tour season where I finished third in the Order of Merit, I suffered an injury to my right shoulder that affected my game and my results in the second half of the PGTI season. I’m still playing through pain and that has reduced my distance with the driver and irons.

“Therefore, today’s round is all the more special since I’ve done well despite not being in the best of physical shape. I would like to thank Priyanshu Singh’s caddie Sachin who helped me with my putting before the tournament by getting me to do certain drills. My caddie Sushant has also done a great job by giving me good lines on the greens.”

M Dharma (73-65) made the big move on Friday with eight birdies and a bogey. A marked improvement in Dharma’s tee shots on day two could be attributed to his decision to choose his two-iron over the driver. The 33-year-old currently in ninth on the PGTI Rankings landed it close through the round except on the seventh where he knocked in a 20-footer for birdie. Dharma also ended the day with a good up and down for a par save on the 18th.

Dharma said, “Club selection was the big issue with my game during round one. But today I got it right as I changed strategy by teeing off using the two-iron more often than the driver. That helped me keep the ball in play unlike the first round where I was struggling with my tee shots. I hit 14 greens in regulation today as compared to 10 in round one.

“I was really pleased to make a birdie on the seventh, a hole that I consider one of the toughest on this course. A good start and being four-under through seven holes really lifted my spirits and contributed to my good score.

“My goal for the season is to break into the top-5 of the PGTI Order of Merit and a good finish here in Kolkata will go a long way in helping me achieve that objective.”

Chandigarh’s Akshay Sharma (70) was in fourth at five-under-139 while Gurugram’s Ankur Chadha (73), the joint overnight leader, slipped to tied fifth at three-under-141.

Kolkata’s Sunit Chowrasia (72) was a further shot back in tied ninth at two-under-142.

Delhi-based rookie Kshitij Naveed Kaul, the highest-ranked player in the field being fourth in the PGTI Rankings, occupied tied 12th at one-under-143.