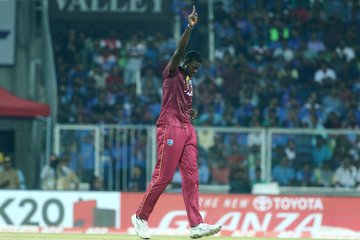 Thiruvananthapuram/UNI: World champions West Indies produced a dramatic comeback by defeating India by eight wickets and nine balls to spare in the second T20 clash which helped them to level their three-match series 1-1 at the Sports Hub Stadium here on Sunday.

For West Indies, a well-knitted 67 by Lendl Simmons and a valuable 40 by Evin Lewis helped them to overhaul India, losing just two wickets and proved again that their 'brand' defending World Cup champion in the shortest format is ideal for them.

A spirited West Indies team bounced back from the setback struck in the first match and managed to limit the hosts to a moderate total of 170 for 7 after asking them to take first strike and chased down the target with eight wickets in hand and thereby underlined their return to the series.

As in the previous match, the West Indies innings saw contributions from all who faced the strike, instead of one standout innings, that makes it difficult for the Indian bowlers to tame the Caribbeans.

Moreover, it was certainly the poor fielding coupled with an aimless bowling helped the Windies to notch up eight wicket victory against Virat-led India who overcome a stiff target with confidence in the previous match against them.