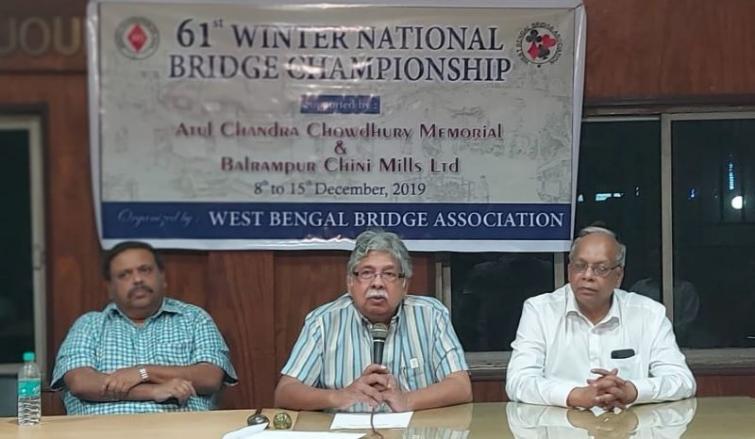 Kolkata/IBNS: Top Indian players including gold and bronze medalists in last Asian games in Djakarta will stake their claim for the top honours in the 61st  Winter National Bridge Championship to be held in the Netaji Indoor Stadium during Dec 8 to 15 next.

Briefing media persons about the forthcoming mega bridge event, organising secretary of the meet which is being conducted by West Bengal Bridge Association Arijit Guha informed that about twelve hundred players representing nearly two hundred teams from all over the country will join this championship which is being held in the city after seven years. There would be about two hundred women players which would include some all women teams as well.

Besides there would be event for IMP Pairs, Mixed Pairs and Junior Team also.

Apart from  S N De Sarkar and Pranab Bardhan, who won the Gold Medal in Pairs event, Sumit Mukherjee and Debabrata Mazumder, who were part of  Bronze Medal winners in Team event  in the last Asian Games, Subrata Saha and Sukomal Das who were members of the senior team that played at the last world championship in China last August will be seen in action in this important event.

Guha said that the championship will begin the three days Swiss league for qualifying for the Ruia teams after which  8 and 16 teams will qualify for the Ruia Gold and Silver respectively.

During the last four days Pair and Team events will  be held concurrently.