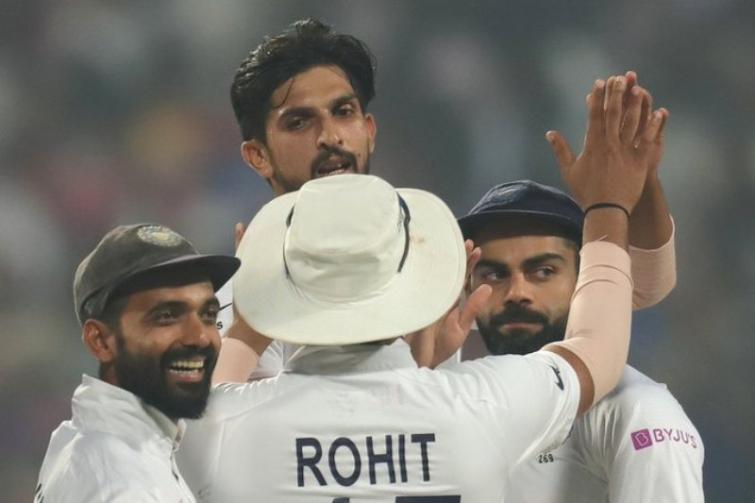 Kolkata/IBNS: After Virat Kohli's display with the bat, now Ishant Sharma joined the party to destroy Bangladesh's batting lineup as he picked up two wickets to leave the visitors struggling at seven runs for the loss of two wickets on the second day of the Pink Ball Test match here on Saturday.

India earlier declared their first innings at 347 runs for the loss nine wickets with a lead of 241 runs over Bangladesh's first innings total of 106.

Shadman Islam (0) and skipper Mominul Haque (0) returned to the pavilion even before they could settle down at the crease in front of a fierce Ishant Sharma spell that was cheered aloud by the crowd present at the iconic stadium in the city.

Imrul Kayes (3*) and Mohammad Mithun (4*) are at the crease when the tea break was announced.

Earlier, taking a strong 241 runs lead in the first innings, India, riding on skipper Virat Kohli's stylish 136 runs knock, are currently on the diver's seat in the ongoing second Test match against Bangladesh here on Saturday.

India declared their first innings at 347/9.

India completely dominated the proceedings on Saturday, a day after Bangladesh were bowled out for 106 runs in the first innings.

The match is significant as it is the first Pink Ball Test which the Indian team is playing.

Kohli smashed 18 boundaries in the innings before he was sent to the pavilion following a stunner from Taijul Islam at the boundary off Ebadat Hossein.

India lost the wicket of Ravindra Jadeja (12) after lunch.

Abu Jayed bowled him in the second delivery after break.

On Friday, Indian skipper Kohli had added another feather to his crown when became the fastest batsmen to score 5,000 runs as captain. He also became the first Indian batsman to score a century in the Pink Ball format of the Test match.