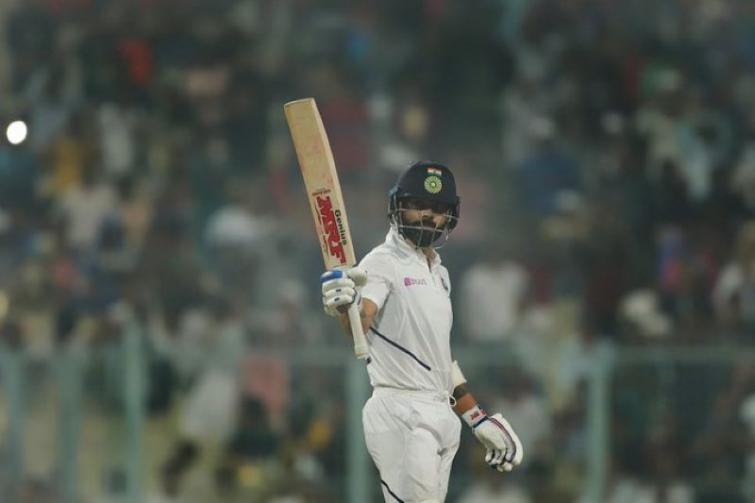 Kolkata/UNI: Indian captain Virat Kohli became the first cricketer in this continent to score a century in the historic day-night pink ball Test against Bangladesh as the host were heading for a big total on Day 2 in the 5-day play at Eden Gardens here on Saturday.

India were 289 runs for loss of four wickets at lunch with six more to bat and leading by 183 runs in the first knock.

Virat Kohli was batting at 130 and Ravindra Jadeja not out at 12.

India began this noon with an overnight total of 174/3 (46 overs) with not-out batsmen Ajinkya Rahane (23) and Virat Kohli (59) and the duo started picking up runs at ease until Rahane departed at 51 giving a simple catch to Ebadat Hossain at first slip off spinner Taijul Islam.

This was 31-year-old Rahane's 22nd half century in Tests, fourth in trot and seventh in last 10 innings. His latest half century came from seven boundaries.
Incidentally the wicket was bagged by a spinner as Indian pace trio Ishant Sharma, Umesh Yadav and Mohammed Shami shared 10 Bangladesh wickets among them.

The three Indian wickets fell on the first day were taken by Bangla pacers.