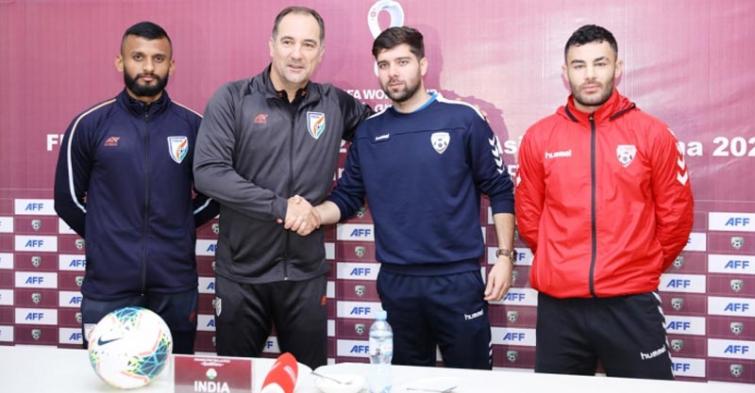 Dushanbe/IBNS:Hours after arriving in Dushanbe, the capital of Tajikistan, India head coach Igor Stimac stated that the Blue Tigers need to overcome “tough challenges” imposed by Afghanistan, besides braving adversities, when they face-off in the Group E encounter of the FIFA World Cup Qatar 2022 and AFC Asian Cup China 2023 preliminary joint Qualification Round 2 match at the Republican Central Stadium in Dushanbe on Thursday.

“We know how difficult this game is going to be for us. We both (India and Afghanistan) have already faced Qatar and Bangladesh in the qualifiers. We see Afghanistan as a physical side with good composure. They have some players who also have the experience of playing in Europe. They are not in the top division, but playing in Europe always gives you an extra bit of confidence. They have stamina and they’ll pose a tough challenge for us,” Stimac said in the pre-match press conference held in Dushanbe today (November 13) morning.

Dushanbe welcomed the Blue Tigers contingent with chilly weather as the mercury hovered around 6-7° degrees Celsius. However, despite the low temperature, the fighting spirit of the Indian team remains high as ever.

“As a player, you have to be confident and face every challenge head-on. That’s why we are here. Yes, the conditions have not been in our favour to some extent but that won’t have any effect when the referee blows the whistle. If we can execute the coach’s plans on the pitch, we can surely hope for a good result,” a buoyant Pronay Halder voiced at the official press conference.

Meanwhile, experienced centre back Anas Edathodika flew back home late on Tuesday owing to a family emergency. “Anas (Edathodika) is having a tough time. Our thoughts are with him and his family. He has been an instrumental member of the squad and we will miss him. The onus is now on the other players to take the mantle and deliver on the pitch,” Stimac added.

Coach Stimac thanked the Tajikistan FA for their hospitality as well as for providing Afghanistan with the opportunity to host their home games in Dushanbe.

“Thank you very much for welcoming us. I’d like to take this opportunity to thank you for all the hospitality and hosting the qualifying games. It’s the first time I’m here in Tajikistan and I have really been enjoying it,” the 52-year-old coach echoed.

The Coach further analysed the Blue Tigers’ last match against Bangladesh as well, saying, “The most difficult games are those when people who are following you, write the result before the game starts. We witnessed it against Qatar as well as Bangladesh. When Bangladesh came, they were defending with 10 players and were looking to counter-attack. Without taking away any credit from them, we earned a point against them. We can’t forget that they were leading until the 87th minute.”

The gaffer also maintained that India’s passion for the beautiful game is changing and the Blue Tigers will try their level best to fulfil the expectations and grab their first win in the joint qualification round.

“We are happy that people in India are following us with lots of passion now. They have a great expectation on us and we’ll try our level best to make them happy,” he said.

Meanwhile, Anoush Dastagiv, Afghanistan Head Coach mentioned though it’s not their own country, they get “confidence” when they play in Dushanbe.

“Yes, geographically it’s far from own country and we would have been happier if we could have gotten the chance to play in our own country. But, playing in Tajikistan has always given us much-needed confidence. We have beaten Cambodia, Bangladesh here and settled with a draw against Tajikistan, Jordan. Those results will surely give us a psychological boost tomorrow,” Dastagiv said.

“Here, people speak our language. We feel at home. Whenever we play in front of Afghani crowd, we never fail to get positive results. We hope we can get something closer to that tomorrow as well,” he added.

The match is scheduled to kick-off at 7.30 PM IST (7 PM local time). It will be telecast live on the Star Sports network and streamed live online on Hotstar and Jio TV.