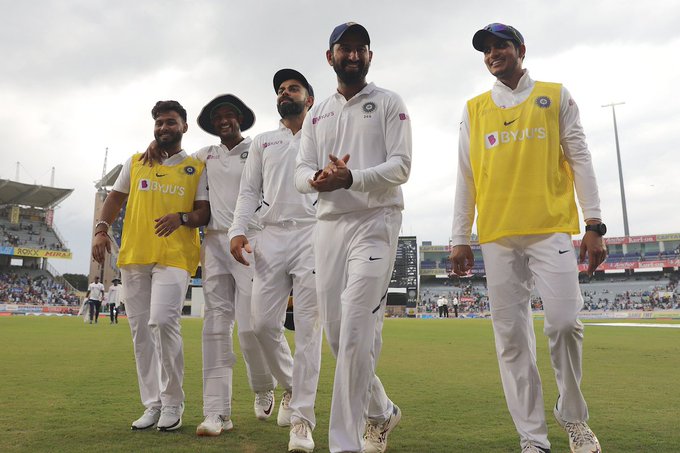 Ranchi/IBNS: Indian batsman Rohit Sharma a hit a double century and pacers Umesh Yadav and Mohammed Shami picked up two wickets as the hosts dominated their proceedings on the second day fo the third Test match against South Africa here on Sunday.

India declared their first innings at 497 runs for the loss of nine wickets and then went on to pick up two wickets of the South African side as the visitors struggled at 9/2 when bad light forced the match to be stopped early.

Opener Dean Elgar (0) was caught behind for a duck on the second ball of the first over by Mohammed Shami and Umesh Yadav picked up the wicket of Quinton de Kock (4) to give the visitors initials jolts.

Zubayr Hamza (0*) and skipper Faf Du Plessis (1*) are at the crease at present.

Rohit hit another golden knock of his career when he smashed 212 runs off 255 balls. He hit 28 boundaries and six sixes in his knock.

Ajinkya Rahane (115) and Ravindra Jadeja (51) contributed with their willows in the Indian innings.