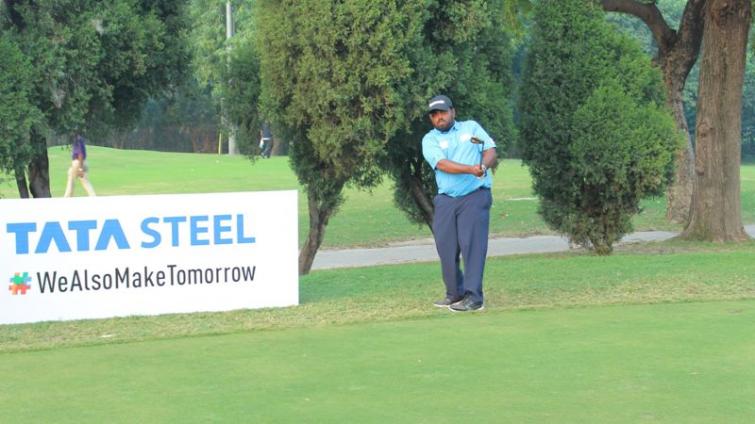 Chandigarh/IBNS: Sri Lankan Mithun Perera impressed with a classy seven-under-65 to throw his hat in the ring and join local favourite Karandeep Kochhar in the halfway lead at 12-under-132 at the Jeev Milkha Singh Invitational 2019 Presented by TAKE Solutions, a Rs. 1.5 crore event being played at the Chandigarh Golf Club.

Karandeep posted a five-under-67 to continue at the top of the leaderboard for the second in succession.

The current TATA Steel PGTI Order of Merit leader Rashid Khan of Delhi matched the course record with a scorching eight-under-64 to also rise into contention. He was bunched in tied third at a total of nine-under-135 along with Chandigarh’s Ajeetesh Sandhu (69), Sri Lankan N Thangaraja (68), Delhi’s Himmat Singh Rai (69) and Om Prakash Chouhan (69) of Mhow.

The cut came down at even-par-144. Fifty professionals made it to the weekend rounds.

Tournament host and Indian golfing icon Jeev Milkha Singh missed the cut as he followed up his first round 72 with a 77 on day two to total five-over-149.

Pukhraj Singh Gill of Ludhiana made a hole-in-one on the eighth. However, Pukhraj who shot a 79 on Friday missed the cut. Gill’s was the third hole-in-one of the tournament following N Thangaraja and Martendeya Kanishka Sinha’s aces on day one.

Mithun Perera (67-65), lying overnight tied fifth and two off the lead, admitted that the return of his putting form in round one had a ripple effect on other aspects of his game that benefitted him in round two in a major way.

Perera, a six-time winner on the PGTI, had three birdies in succession early in his round for the second straight day when he gained strokes on the second, third and fourth. The 32-year-old from Colombo was landing everything within five feet and thus picked up two more birdies on the sixth and eighth. Mithun chipped-in on both the third and eighth.

Perera’s pin-point accuracy with his ball-striking continued on the back-nine where he produced three more birdies at the cost of a lone bogey on the 15th. Mithun’s only bogey of the tournament so far came on his 33rd hole.

Mithun, who last won an event in March 2018 in Chennai, said, “I used to make firm putts early on in my career. But once I got on the Asian Tour in 2015 and started playing a lot of events, I somehow lost those firm putts. I then had a good stroke but dying putts.

“However, after a lot of work on my putting, yesterday in round one I finally felt I got my firm putting stroke back when I sank a couple of long birdie putts on the 12th and 16th. That took a lot of pressure off me and had a positive effect on the other departments of my game. That’s the reason I struck the ball so well today. I hardly left myself a long putt. I just hope to continue this rhythm.”

Karandeep Kochhar (65-67), the round one leader, continued his fine form with a bogey-free 67. He too has conceded just one shot so far this week. Kochhar had a slow start making just one birdie on the front-nine. He then drained four more on the back-nine thanks to his consistent putting from six to seven feet.

Karandeep said, “I was just very confident within a radius of six to seven feet on the greens. I made a couple of clutch par putts on the fourth and seventh that kept my round going. I drove the ball better and hit better tee shots today as compared to round one even though I returned a higher score.

“I know it’s important to stay in the moment and not get too ahead of myself in order to have a shot at the title this week.”

Rashid Khan (71-64), a winner of three titles this year, continued to play with the self-belief that has made 2019 a defining year for him. Rashid, the winner of PGTI’s last event at the Chandigarh Golf Club in May this year, climbed 23 spots from his overnight tied 26th when he matched the course record on Friday.

Khan made an eagle and six birdies on day two to match the course record set by Greater Noida’s Sudhir Sharma during the PGTI event held in May this year. Rashid sank a 15-feet birdie on the 12th before using his wedges well to set up short birdie putts on the 16th, 17th and 18th.

The two-time Asian Tour winner then had a fabulous second-nine as he eagled the par-5 second after landing his approach three feet from the pin and then followed that up with a 50 feet birdie conversion on the fourth and a birdie chip-in on the fifth.

Rashid said, “I found most of the greens today and made a lot of up and downs. When I began the round, I told myself to just keep the ball in play. That worked out well for me. I’m delighted to have equalled the course record.”

Reigning champion Chikkarangappa of Bengaluru jumped 33 spots to tied 22nd at three-under-141 after his round of 68.

Rory Hie (70) of Indonesia, the leading foreign name in the field, was a further shot back in tied 27th.