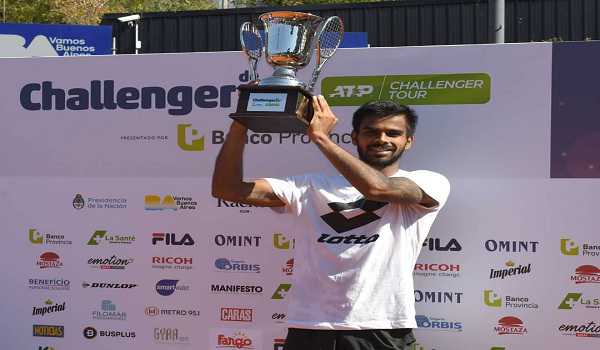 Seventh-seeded Nagal registered a comfortable 6-4, 6-2 win over the Argentine 8th seed in a game which lasted for one hour and 40 minutes on Sunday.

After this win, Sumit will now enter the top 135 of the ATP rankings when the new list is released on Monday.

Earlier this month, Sumit had achieved his career-best ATP ranking of 159 after finishing runner-up in the Banja Luka ATP Challenger, where he lost to Tallon Griekspoor of the Netherlands in the final.

In August , Sumit Nagal had earned recognition by qualifying for US Open main draw where he was pitted against tennis icon Roger Federer. At that time, Sumit had taken a set off Swiss maestro Roger Federer in the first round before losing 6-4 1-6 2-6 4-6.

Nagal who came to Buenos Aires without his coach remained cool and composed throughout the match and played superbly.

After winning the title, Sumit Nagal was quoted as saying “It's my first time in Argentina and in Buenos Aires. I decided to come because there were not many tournaments in Europe, and I thought I could do well. I've started in the best way, going from less to more in the week and this brings me closer to being able to get into the Top 100.'

'I have Cristian Garín from Chile as an example that last year he won three straight challengers in a year and got into it. I was very confident in the match with Federer in the US Open and when a player is confident everything changes, that is tennis, it can make you unbeatable," he added.

Nagal, a former cricketer, is of the opinion that "Indian tennis is improving, there are some players in the top 200 but there is a long way to go. In the last 15 years there was only one player in the top 100 in singles and some prominent double players namely Paes and Bhupathi."

It was on the advice of his father that Nagal switched to tennis from cricket.