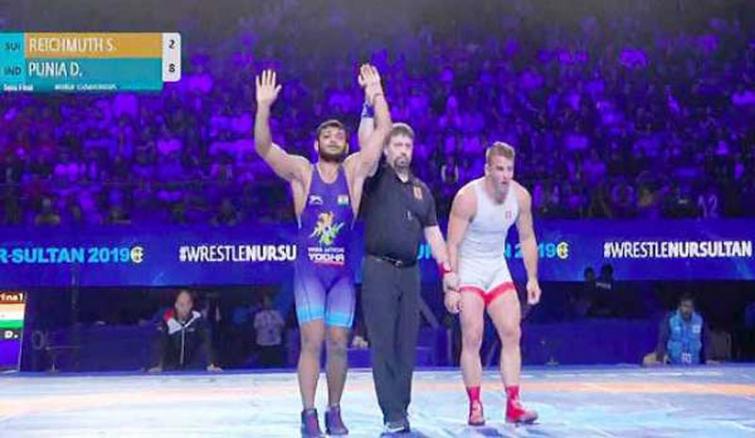 Deepak defeated Carlos Arturo Izquierdo Mendez of Colombia in the quarter-finals to become the fourth Indian wrestler to secure a berth for the Tokyo Olympics next year.

Vinesh Phogat, Bajrang Punia and Ravi Kumar have already made the cut for the 2020 Games and bagged bronze medals in their respective weight categories.

Earlier, in his first round contest, he made remarkable comeback to recover from a 0-5 deficit to win 8-6 against Kazhakstan's Adilet Davlumbayev. Deepak will now face Stefan Reichmuth of Switzerland for a place in the finals.

Aware had earlier registered a technical superiority win over Turkmenistan's Kerim Hojakov in the quarters.

The category of 61 kg is non-olympic category but nevertheless Aware’s semi-final entry will give India another chance to take a shot at the world championship medal.

Aware who is know for his swift movement used the same to his advantage in his close 10-7 victory over Rassul Kaliyev of Kazakhstan to book a semi-final berth. He will meet 2016 world championship silver medallist Beka Lomtadze in the semi-finals.

Jitender on the other hand, stunned bronze medallist Kotanoglu of Turkey 7-1 in the men's 79kg freestyle category. Mausam Khatri lost 0-10 to top-seeded Kyle Frederick Snyder of USA in 97 kg category.