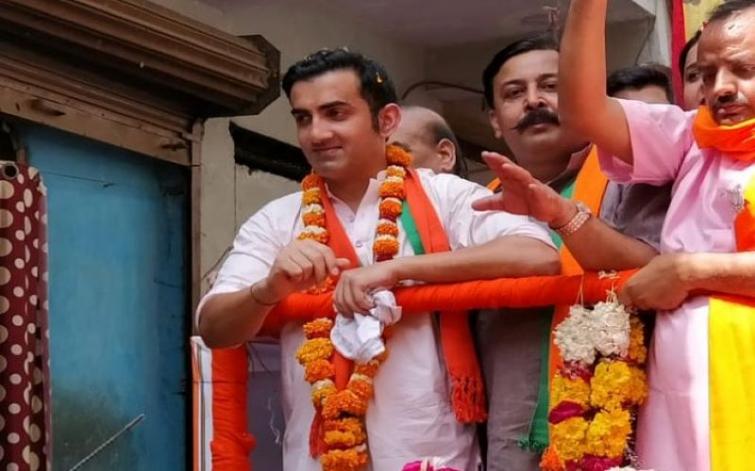 Gautam, who is a former Indian cricketer,  tweeted: "@SAfridiOfficial  is spot on guys. There is “unprovoked aggression”, there r “crimes against humanity”. He shud be lauded for bringing this up. Only thing is he forgot to mention that all this is happening in “Pakistan Occupied Kashmir”. Don’t worry, will sort it out son!!! ."

@SAfridiOfficial is spot on guys. There is “unprovoked aggression”, there r “crimes against humanity”. He shud be lauded ðŸ‘for bringing this up. Only thing is he forgot to mention that all this is happening in “Pakistan Occupied Kashmir”. Don’t worry, will sort it out son!!!

As the Indian government  passed a resolution in the Rajya Sabha to abolish the special status of Jammu and Kashmir, former Pakistani skipper and iconic international cricketer Shahid Afridi questioned the silence of the United Nations on the issue.

"Kashmiris must be given their due rights as per #UN resolution. The rights of Freedom like all of us. Why was @UN created & why is it sleeping? The unprovoked aggression & crimes being committed in Kashmir against #Humanity must be noted. The @POTUS must play his role to mediate," he tweeted.

I am proud to launch National Fragrance of ðŸ‡µðŸ‡°, Pride, in collaboration with J. Fragrances. Paying tribute to the spirit of our enthusiastic Pakistanis, v have crafted a scent with fruity & floral notes making it the epitome of patriotism in my style! #JDot #JDotFragrances pic.twitter.com/UJybb1GtgZ

Gautam Gambhir and Shahid Afridi had played several matches against each other on the field in their international cricket playing days.

Gautam was a part of the Indian side that won the World T20 and 2011 World Cup.

Meanwhile, in India, the Jammu and Kashmir (Reorganisation) Bill 2019 is all set to be taken for consideration in the Lok Sabha on Tuesday.

In today's session, the bill might not be facing much trouble owing to the numericl advantage of the ruling BJP in the lower house of the Parliament.

What happened on Monday?

Hours after Article 370 has been scrapped by the Centre, Jammu and Kashmir's former chief ministers Mehbooba Mufti and Omar Abdullah, who were placed under house arrest on late Sunday evening, have been formally arrested, media reports said.

Mufti, who served as the CM of that state in ally with the BJP, ended her tie with the ruling party in June last year.

She has been vocal about the events in the state since the troop build-up started last week.

Mufti on Monday tweeted: "Today marks the darkest day in Indian democracy. Decision of J&K leadership to reject 2 nation theory in 1947 & align with India has backfired. Unilateral decision of GOI to scrap Article 370 is illegal & unconstitutional which will make India an occupational force in J&K."

"It will have catastrophic consequences for the subcontinent. GOIs intentions are clear. They want the territory of J&K by terrorising its people. India has failed Kashmir in keeping its promises."

She added, "People like us who placed faith in Parliament, the temple of democracy have been deceived. Those elements in J&K who rejected the constitution & sought resolution under the UN have been vindicated. This will exacerbate the alienation Kashmiris feel."

The politically-volatile and terrorism wracked Indian state of Jammu and Kashmir, a bone of contention and military disputes for over seven decades between two nuclear armed neighbours of India and Pakistan, will not enjoy any special status anymore, as the ruling BJP-led government scrapped Article 370, in a move to integrate the Muslim-majority region with the rest of the country and bifurcate the state into two.

Union Home Minister Amit Shah told Parliament that the government would scrap Article 370, the constitutional provision that allowed Jammu and Kashmir to make its own laws while massive troops deployment continued in the region where the local political leaders were put under house arrest since midnight.

The Modi government also scrapped Article 35A, which so far allowed the Jammu and Kashmir state's legislature to define “permanent residents” of the state and also provided special rights and privileges to those permanent residents, through the presidential order.

The Home Minister said the decisions have been taken in view of fulfilling the aspirations of people of Ladakh and the internal security in Jammu and Kashmir.

While Kashmir leaders like Omar Abdullah and Mehbooba Mufti called the moves unilateral, unconstitutional and termed the day as darkest in Indian democracy, a larger number of otherwise anti-BJP political parties of India from Opposition- BJD, BSP, YSR and TRS- welcomed the move of scrapping Article 370.

Both the bills have received the ascent of President Ram Nath Kovind.