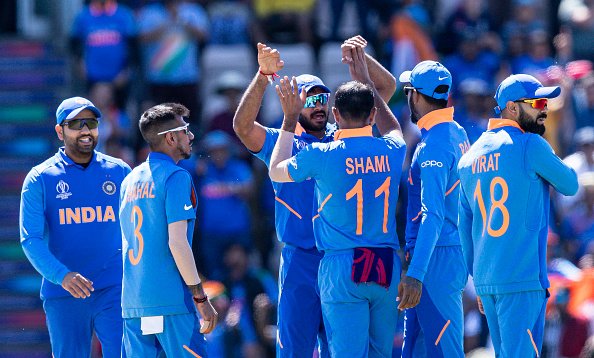 Southampton, June 22 (IBNS): Mohammed Shami bowled a hat-trick in his final over as India snatched a 11 runs victory against Afghanistan in a thrilling group stage match of the World Cup here on Saturday.

Afghanistan, riding on a fighting 52 runs knock by Mohammad Nabi, was n the verge of causing the biggest upset in this edition of the World Cup but Shami prevented the damage.

India remained unbeaten in the tournament so far with the win.

After posting 224 runs for the loss of eight wickets, struggling mostly in front of a spirited performance by Afghanistan spinners, Indian bowlers did the trick as they bowled out the neighbours for 213 runs in 49.5 overs.

Jasprit Bumrah (39/2) bowled a memorable 49th over but it was Shami, who played the match after Bhuvaneswar Kumar missed the clash due to injury, took four wickets to script a memorable victory for the Men in Blue.

Shami picked up a hat-trick, including the wicket of Nabi, in the final over to completely destroy Afghan hope of winning the battle. He picked up the wickets of Aftab Alam and Mujeeb as well.

Virat Kohli and his men survived a scare which the Afghan cricketers gave them in a match that was considered by many cricket fans would be a one-sided affair.

Nabi remained one of the brightest spot in the Afghanistan lineup as his lone fight against a major team will be remembered for years to come.

He hammered four boundaries and a six in his knock and was nearly on the verge of taking his side to the end of victory.

Rahmat Khan remained the second top scorer for the Afghanistan side with his 36.

Pandya, Chahal and Bumrah picked up two wickets each in the match.

Afghanistan spinners showed their magic on field as they restricted the strong Indian batting lineup to 224 runs for the loss of eight wickets in a World Cup match here on Saturday.

India have remained unbeaten in the tournament so far.

However, after the strong performance by the Afghanistan spinners, hopes of witnessing another upset can take place at the end of the game.

Apart from Virat Kohli (67) and Jadav (52), the rest of the batting line up struggled in front of the spirited Afghanistan side.

Rohit Sharma (1) departed early, but after Virat and KL Rahul (30) stabilised the innings Afghanistan bowlers successfully broke the partnership by taking the wicket of the new opener of the Men In Blue.

Rahul, who is playing the second match as an opener, was dismissed by Nabi.

Vijay Shankar (29) and MS Dhoni (28) could not convert the start they got in their innings.

Jadhav contributed three boundaries and a six which helped India's cause at the end.

Gulbadin Naib and Naib picked up two wickets each.