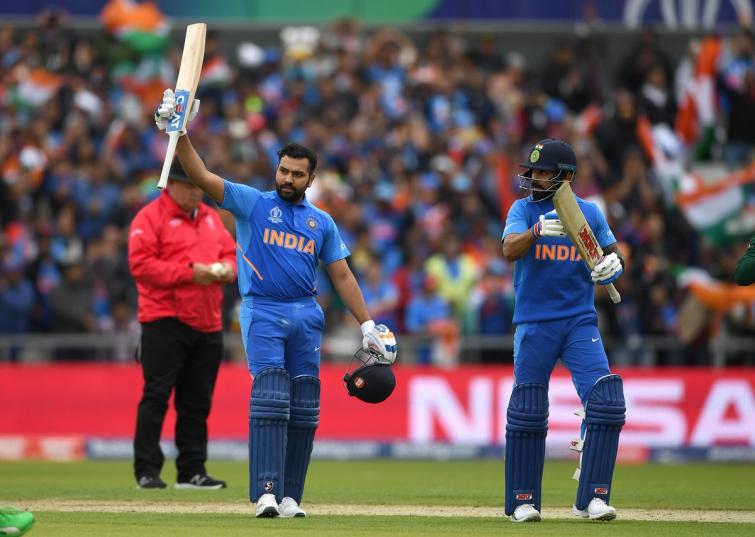 Manchester, June 16 (IBNS): Riding on Rohit Sharma's majestic 140 run, which set India on a dominating position at the beginning of the match, India scored 336 runs for the loss of five wickets in a high-voltage Wold Cup match against Pakistan which is being closely watched by millions of people on the two sides of the borders with high expectations on Sunday.

Pakistan have never been able to beat India in a World Cup match so far.

KL Rahul (57), who opened the innings in place of injured Shikhar Dhawan, added 136 runs in the opening wicket partnership with Rohit.

Known as 'Hitman', Rohit Sharma actually showed his strength of playing big shots in a match when India needed him the most as he hammered 14 boundaries and three sixes in his 113-ball knock.

Rahul displayed his techniques in full show and hit two sixes and three boundaries in a knock that gave India a foundation to deliver in a match that is being played in the Old Trafford stadium in front of the crowd of green and blue.

Hardik Pandya added 26 runs while MS Dhoni made only one before Pakistani bowler Mohammad Amir showed them the door to the pavilion.

In a rain hit match, Vijay Shankar (15*) and Jadhav (9*)  added some quick runs at the end as India posted a competitive score at the end.

India and Pakistan match is assuming importance specially this year after the two nuclear-armed neighbours nearly engaged themselves in another conflict after the Pulwama terror incident.

India and Pakistan have fought three wars in the past.

Amid heightened political tension, the match is being watched by billions of emotional fans both in India and Pakistan on Sunday.