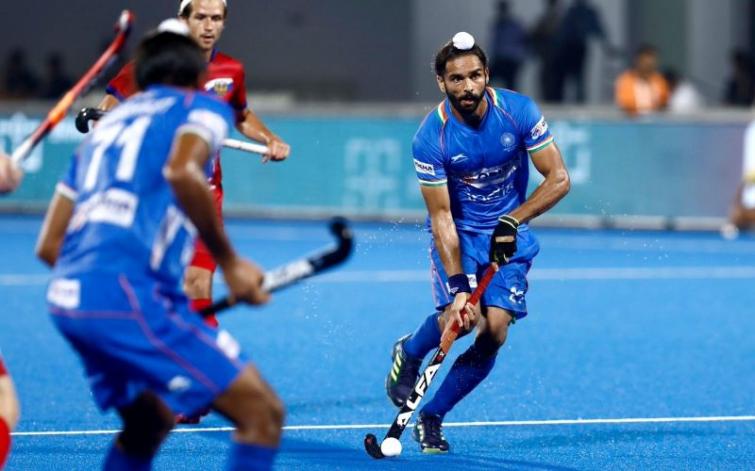 Bhubaneswar, Jun 7 (UNI): India brought happiness to their home fans with a large success 10-0 over Russia in their first game of the FIH Men’s Series Finals Bhubaneswar Odisha 2019 on Thursday.

In front of their home fans and wearing their new team kit, India immediately put pressure on the Russian goal. The home team came close to taking an early lead with Harmanpreet Singh’s shot hitting the goalpost.

However, Russia reacted and created their own chance with a shot from Sergey Lepeshkin. But India was determined to open the scoring and they managed to do so shortly before the end of the opening quarter thanks to a nice deflection in the air from Nilakanta Sharma.

The second quarter started with the home team on the front foot, with two consecutive goals from Simranjeet Singh and Amit Rohidas. India were dominating possession and Russia seemed to struggle with the tempo imposed by the hosts.

The second half proved particularly prolific for the hosts. It took less than 90 seconds for India to score again, with a fine drag-flick from Harmanpreet Singh following a penalty corner. Only two minutes later, same scenario, with this time, Varun Kumar getting the final shot. India seemed unstoppable and scored three more goals before the end of the third quarter through Gursahibjit Singh, Akashdeep Singh and Vivek Prasad.

The last quarter saw no change in the pattern of the game. Harmanpreet Singh added a second goal to his tally and so did Akashdeep Singh with a remarkable shot from the edge of the circle, making the final score 10-0 to the host nation.

This is the highest number of goals scored by one team in one game amongst all FIH Series Finals matches played so far.

India’s captain Manpreet Singh: “Actually we did not expect that because we know that Russia has a good defence because they’re playing many indoor games. The crowd here is always amazing and they always support us, so I want to tell them ‘thank you so much for your support!’.”

Russia’s Pavel Golubev: “It was a really difficult game for us.

We made a lot of mistakes. I think it was a kind of lack of confidence. But we gained a lot of experience in this game and we will use it for the next games. Thanks to India to play such a game with us, it’s really a big experience for us.”