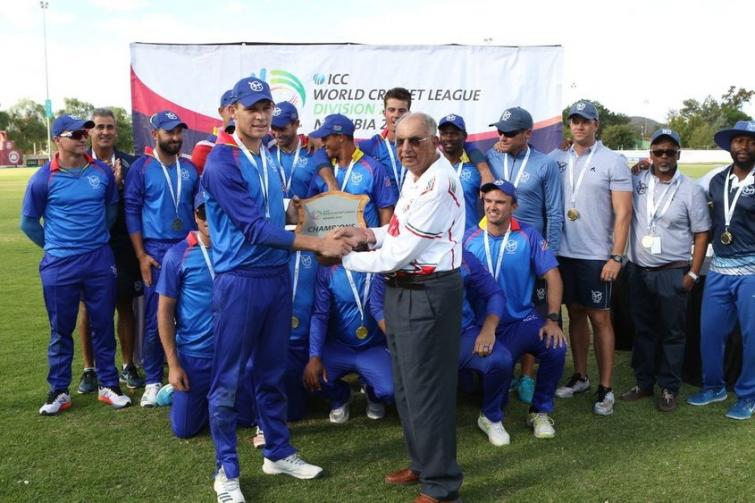 Dubai, Apr 28 (IBNS): Namibia have been crowned ICC World Cricket League Division 2 champions after a comprehensive victory over Oman in the final in Windhoek.

Both teams were already assured of qualification to the ICC Men’s Cricket World Cup League 2, guaranteeing more regular competitive cricket and their ODI status in the process, before taking to the field.

But Namibia reversed their group-stage defeat to the same opponents to take the win and division title, with Jan Frylinck taking five wickets in the 145-run victory.

Third place went to Papua New Guinea as they overcame United States of America, celebrating their qualification in style thanks to a strong all-round display.

Canada narrowly missed out on a League 2 place and ODI status in their final group game but ended their campaign in Namibia on a high, victorious against Hong Kong to secure fifth place, with both teams now playing in ICC Men’s Cricket World Cup Challenge League.

History was made for Oman as they achieved ODI status for the first time, but they weren’t able to celebrate breaking new ground with a win.

Batting first, Namibia started on the front foot despite the earlier wicket of Stephan Baard (13), with Karl Birkenstock making his first significant effort of the competition, scoring 61.

Regular wickets seemed to hold the hosts back with several batsmen getting in and getting out, as Fayyaz Butt (2/28) and Aqib Ilyas (2/32) helped Oman restrict their opponents to 226/7 from 50 overs.

But Namibia made early inroads into the chase, with Khawar Ali (3), Jatinder Singh (0), Ilyas (11) and captain Zeeshan Maqsood (12) falling within eight overs as Oman slipped to 26/4.

Three of those wickets went to Jan Frylinck and he wasn’t done there, finishing with 5/13 from his eight overs as Oman were bowled out for 81.

JJ Smit chipped in with three wickets, taking the last scalp of Bilal Khan, caught behind, with Suraj Kumar top-scoring with 27.

The final also saw history made on the field, with Claire Polosak becoming the first woman umpire to stand in a men’s ODI.

Namibia Head Coach, Pierre de Bruyn said: “I can’t explain it, we have put such hard work in, I know it sounds like a cliché, but what we have achieved today for the nation is incredibly important. We have so much talent in this country, and its exciting times for Namibia cricket and I hope that every young player wants to be part of the system. Looking ahead to the next two years, these matches are the matches we want to play in, we want to grow and we need to go to the next level.”

Player of the Tournament, Namibia’s JJ Smit said: “Everybody has worked hard for this and comes down to the whole team, not just me as an individual so I am grateful to the team, really pleased. The tournament was very memorable, last year we were all down and out, and this year to qualify and to get ODI status is perfect.”


Oman Head Coach Duleep Mendis said: “It was a good tournament, all the teams played very competitive cricket and it was a very good tournament, organised well, I think the best team won the tournament at the end. Now we have ODI status, we will have to put a long term plan in place and how we can sustain this over the next two years. We need to improve and we will certainly do that.”

The middle order struggled as Norman Vanua (4/37) took charge, though Monank Patel and Hayden Walsh steadied the ship before Timil Patel (50 not out) helped the United States to 164 all out from 43.4 overs.

The chase was in good shape when PNG took drinks at 144 for five, with Lega Siaka (62) top-scoring thanks to an innings that featured nine fours and a six.

Solid USA bowling had PNG on the back foot with wickets shared around but a 12-ball 28 from Vanua wrapped up the game, striking three sixes in the 33rd over to seal the five-wicket win.

PNG Head Coach, Joe Dawes said: “It is nice to finish third, which probably after a couple games we didn’t think we would do. We came here to get our ODI status back and we achieved that, at the end of the day it has been very successful and we have really enjoyed it. There is going to be stability for all the teams in League 2, we are going to have regular cricket for the next two and half years and we are looking forward to having that.”

USA Head Coach, Pubudu Dassanayake said: “We worked very hard to get this ODI status and we are all very happy we have got it. As a first time coming into this level, it is hard to keep consistency, but we had enough, disappointed we couldn’t win the last game, but overall we are happy. It will be great to have two and half years of high quality cricket and we can improve our structures, as well as the younger and these national players getting to the next level.”

Canada ended their campaign on a high with a five-wicket win over Hong Kong – putting the disappointment of narrowly missing out on the top four behind them.

Bowling first, Canada had Hong Kong in early trouble at 30 for four, with Cecil Pervez (2/22) making early inroads as he, Hiral Patel and Dillon Heyliger each took two wickets.

The star turn came from Saad Bin Zafar, however, taking 4-30 from his full ten overs to wipe out the middle order, Babar Hayat (32) offering the most resistance in Hong Kong’s innings of 113.

Canada’s chase started in ideal fashion as opener Patel blitzed 50 from 44 balls, featuring six fours and a six, halfway to their total by the time ten overs had passed.

Tanwir Afzal and Ehsan Khan threatened a comeback with two wickets apiece, though Ravinderpal Singh (41*) guided Canada to their total with 199 balls remaining.

Hong Kong captain Anshuman Rath said: “It wasn’t a great tournament for us, in these tournaments anyone can beat anyone on their day. It just so happens we were on the wrong end of a few wins, but that is cricket we can’t dwell on it we just need to move forward. Looking forward we have the ICC Men’s T20 World Cup Qualifier in the UAE, the T20 format definitely suits us more and I think we have a few months to recuperate and focus on qualifying for the T20 World Cup in Australia.”