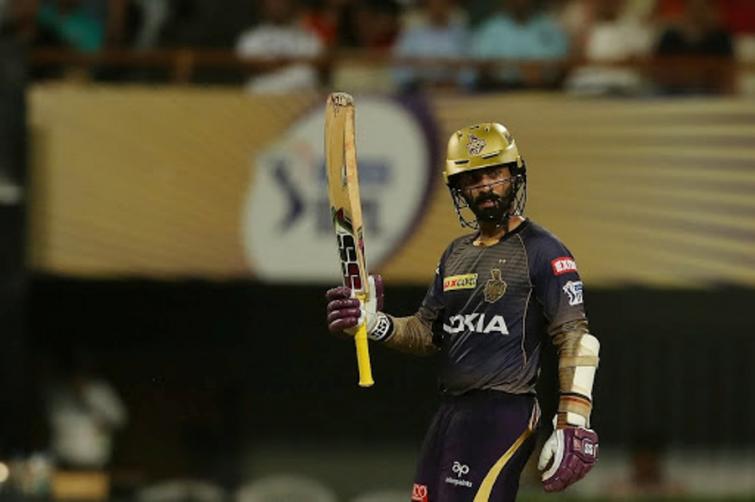 Kolkata, Apr 25 (IBNS):  A skipper’s knock of unbeaten 97 off  50 deliveries by Dinesh Karthick guided Kolkata Knight Riders  to survive an early set back and score 175 losing 6 wickets in their stipulated 20 overs against Rajasthan Royals at Eden Gardens here Thursday night.

Coming to bat at the fall of second wicket with their total reading 31 after fifth over, Karthick took a little time to settle down and then waged a lone battle to take their total to a fighting one.

KKR who were put to bat after Rajasthan Royals won the toss and decided to field received an early jolt when Chris Lynn who opened the KKR batting was bowled by medium pacer Varun Aaron , who opened the attack from the hosts.

RR struck an early blow when Varun Aaron, who opened the RR attack bowled Chris Lynn in the very third delivery of the match before the hosts could put any score on the board.

Inspired with early success Aaron, who was maintaining a fine line and length bagged another KKR scalp soon, this time Shubman Gill who came to open along with Lynn, returned to pavilion failing to negotiate a fine in swinger from Aaron. Gill scored 14 with two boundaries off 14 balls.

After the exit of  Gill, skipper Dinesh Karthik  joined Nitish Rana, who came one down, at the crease. But Rana also made his exit soon failing to the guile of spinner Shreyas Gopal scoring 21 with  three hitting to the fence off 27 deliveries.

The departure of Rana saw Sunil Naraine joining Karthick and it was expected the pair produced a  substantial partnership. Karthick became aggressive and took 25 run off  Shreyas Gopalin in the 11th over. But that was not to be as Narain was run ou after scoring 11 following a misunderstanding with his captain. The pair, however, added 38 runs in 3.1 overs.

With roaring cheers from the crowd  big hitter Andre Russel joined Karthick. The West Indian, however, looked subdued while Karthik played judiciously to keep their score board  moving.

Russel looked still suffering from his old injury  and had to be attended in the field by their team physio. After surviving a chance at his 14 when he was dropped by substitute fielder Prashant Chopra off  Oshane Thomas in the 16. 4 over, he was out being caught by Parag at the deep in the very next delivery by Thomas. Russel scored 14 off same number of deliveries with a sixer.

Varun Aaron was pick of the Rajasthan bowlers as he picked two KKR wickets giving 20 runs off 4 overs. KKR  innings could have ended in a lesser total but for slip shod fielding by  Rajasthan players.