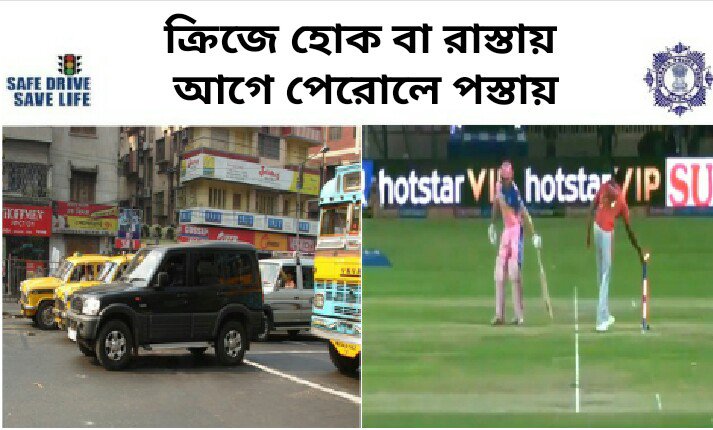 Kolkata, Mar 30 (IBNS): Amid controversy over the 'Mankad' incident during an Indian Premier League match, Kolkata Police has used a footage of the episode to create a meme and aware people about road safety.

Using the footage of the incident perfectly, which is featuring spinner RAshwin and  Buttler, Police designed the meme with another image of  a vehicle crossing a traffic line, with the caption that read an important message: "Crease or road, you will regret, if you cross the line."

In the picture, a car can be seen crossing the traffic line during a signal.

The incident which actually inspired in creating the meme:

In the last ball of the 13th over, when opponent team Rajasthan Royals' score was 108/1, Ashwin stopped from bowling and turned back to run-out non-striker batsman Jos Buttler.

After the on-field umpire referred to the television umpire, Buttler was given out. The match was won by Ashwin's Kings XI Punjab by 14 runs.

According to this law, a bowler before bowling can run-out a non-striker batsman if he leaves the crease too early.

The dismissal style has been named after former Indian cricketer Vinoo Mankad. He had ran out Australia's Bill Brown during a cricket clash in a similar fashion in 1947.

The dismissal is legal but some feels that it is against the spirit of the game.

Australian spin icon Shane Warne even criticised Ashwin for his action during the IPL game.

What did Ashwin say?