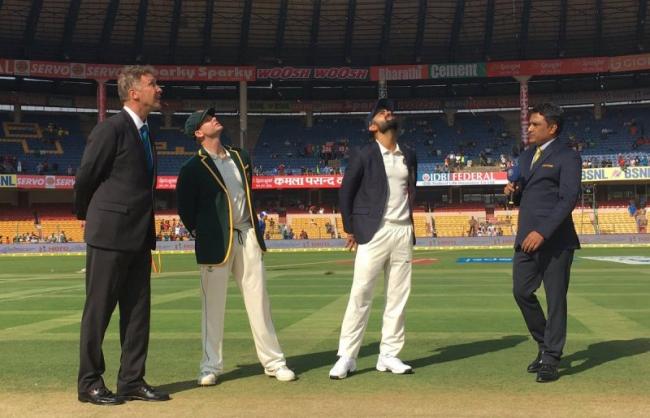 Opener Lokesh Rahul was the man to return to the pavilion after scoring 67 off 102 balls. His partner Murali Vijay (42) and number three batsman Cheteshwar Pujara (10) are at the crease.

India, going equal with Australia with one win and one defeat in the two previous matches, still trail by 331 runs.

Earlier in the day, After losing wickets in quick succession, Australia came back well with a fifty-run stand between skipper Steve Smith and Steve O'Keefe before Umesh Yadav got rid of O'Keefe.

Smith, who played a great innings, remained not out with 178.

The vistiors' innings folded up shortly after lunch.

The Aussies total could have been bigger had not spinner Ravindra Jadeja's late burst restricted them. Jadeja returned with a haul of five wickets for 124 runs.

Resuming  their innings on 299 runs in the morning,  the unbeaten pair of Maxwell and Smith rattled up some quick runs before the former was caught by Saha off Ravindra Jadeja.

His maiden Test hundred comprised nine fours and a couple of sixes.

Pat Cummins, who made a comeback to the Test side after a long gap, failed to disturb the scorers, as his innings only two balls.

Umesh Yadav  picked up three  of wickets, followed by Ashwin, who has one to show for his efforts.