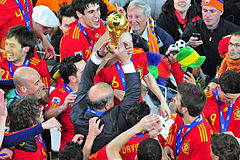 The 2010 World Cup champions, are expected to put up another fantastic show in their bid to defend the title in 2014.

The team has already won two major titles- UEFA Euro in 2008 and 2012- following their World Cup victory in South Africa.

The side had defeated El Salvador 2-0 in a friendly match.

The Spanish team is going to be based in CT do Caju Team Base Camp in Brazil.

The side is grouped in Group B with Netherlands, Chile and Australia.

The official kick-off of the FIFA Fan Fest for Brazil 2014 took place in Iracema Beach in Fortaleza  on Sunday. Brazilian football legend Ronaldo was present at the event.

The World Cup will start from June 12.

The first match will be played between the hosts Brazil and Croatia.