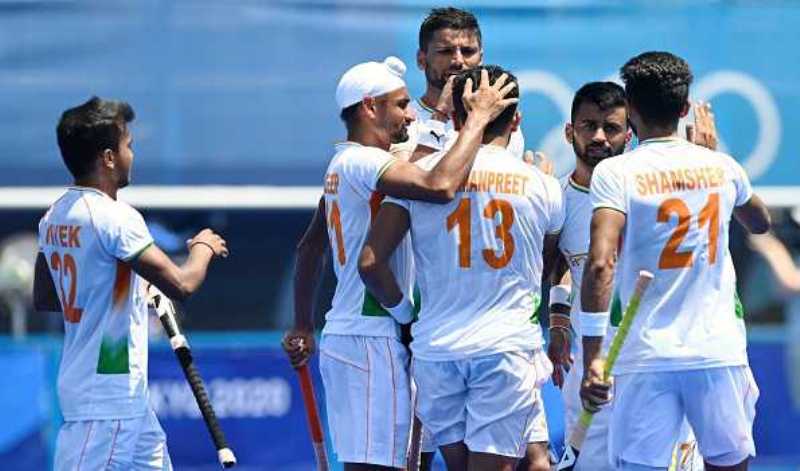 Tokyo/UNI: The Indian men's hockey team got off to a rollicking start at 2020 Tokyo Olympics with a 3-2 win against New Zealand in a Pool A match, here on Saturday.

Rupinder Pal Singh opened the scoreboard for India in the 10th minute, while Harmanpreet Singh extended the lead in the 26th and 33rd minute.

However, it was experienced goalkeeper PR Sreejesh who saved the day for India with excellent work in the goal post to stop New Zealand from converting an equaliser in the dying minutes of the match.

Although it was India who made an aggressive start to the match with Mandeep Singh winning an early PC for India in the third minute, it was New Zealand who managed to draw first blood after Rupinder missed the target by a whisker while converting the PC.

New Zealand’s Kane Russell made no such error as he successfully pumped the ball into India's post to earn a 1-0 lead in the 6th minute.

Only minutes later, an infringement on the line cost New Zealand a penalty stroke. This time, the lanky Rupinder was bang on target fetching India a much-needed equalizer.

Shaking off the early jitters, India looked more dangerous in the second quarter. They created two early chances to score but it was not until the 26th minute that India took a promising 2-1 lead.

India came back stronger in the third quarter creating some early chances. Forwards Mandeep Singh and Dilpreet Singh worked well in the frontline to create scoring opportunities. The attack helped in fetching another PC for India and the New Zealand defence could do little to stop Harmanpreet’s fantastic flick taking India’s lead to 3-1 in the 33rd minute.

Though India was awarded another PC in the 36th minute, New Zealand keeper Leon Hayward managed a good save. However, in the 43rd minute, a lapse in India’s defence enabled New Zealand to bounce back with a well-struck field goal by Stephen Jenness who was set-up with a good assist from Nick Wilson from the right flank.

The final quarter was tense with both teams keeping the tempo up despite soaring temperature in Tokyo which recorded 33 degrees on game day. New Zealand stitched together a compact defence.

The dying minutes of the match was a battle of nerves particularly for India as they conceded back-to-back PCs.

While India skipper was vital as the first rusher in New Zealand’s two attempts, Sreejesh proved just why he is one of the best keepers in the world when he made two match-winning saves that ensured India bagged three points.

In their second Pool A match on Sunday, India will take on the formidable Australia who beat hosts Japan 5-3 today.
--