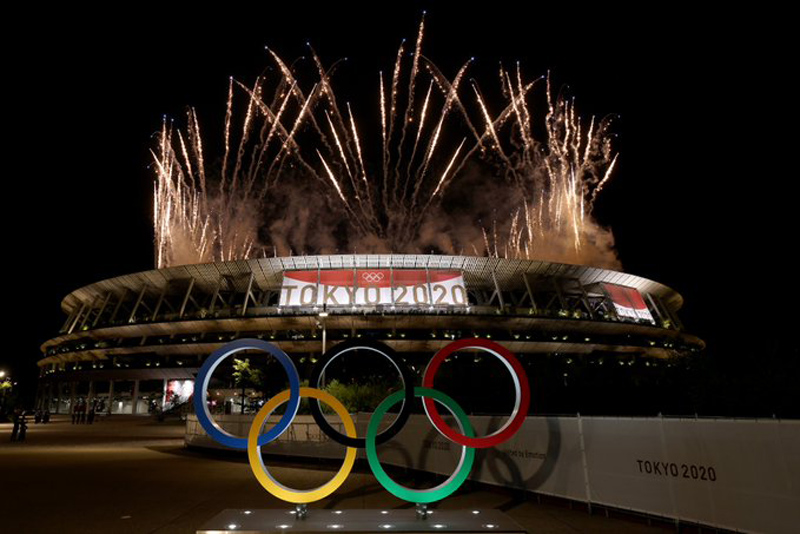 The biggest sporting event on the planet is exactly one year later than originally planned due to the postponement caused by the COVID-19 pandemic.

Only about 950 people, including officials and reporters, were allowed into the 68,000-capacity venue to watch the opening ceremony. But perhaps for the first time in Olympic history, billions of the audience members enjoy the show more than the very limited number of Olympic family members present in the stadium.

Applying high technologies including virtual and augmented reality, Tokyo 2020 organizers have sought to fulfill their goal of "Discover[ing] Tomorrow," the slogan that guided the city's successful bid for the 32nd Olympic Games on September 7, 2013.

It has been almost eight years since Japanese people celebrated the return of the Olympic Games after the 1964 Olympics, but the journey to this point was full of challenges.

On March 24, 2020, Japan's then Prime Minister Shinzo Abe and International Olympic Committee (IOC) president Thomas Bach agreed to delay the Tokyo Olympics and Paralympics by one year due to COVID-19, four days after the Olympic flame, which was lit up in Olympia, Greece without spectators, arrived in Japan.

Sixteen months later, the coronavirus is still threatening the Games, with Tokyo put under its fourth state of emergency for the duration of the entire Olympic Games. On Thursday, Tokyo 2020 organizers reported 12 new positive COVID-19 cases related to the Olympics, including two infected foreign athletes in the athletes' village, bringing the total number of Olympics-linked cases to 87 since July 1.

Consequently, the majority of the venues barred spectators from entering, with cheers and chants from previous Games to be put in place as part of the IOC's digital engagement campaign to ensure athletes won't feel alone.

It wasn't until late Thursday night that the organizers confirmed the opening ceremony would stick to its original programs following the firing of ceremony director Kentaro Kobayashi after a joke about the Holocaust joke he made in 1998 resurfaced.

Yet, against all odds, a virtual seed under the ground of the Olympic Stadium sprouted out of the ground after intensive struggles displayed by its human representation inside the arena, starting a countdown that led to the eventual start of the spectacle.

IOC president Thomas Bach said earlier at a press conference that the Olympic Games is capable of "getting the entire world together in one peaceful competition, to have athletes in one country, in one city, in one Olympic village, competing against each other but living together because they are under the same rules."

China has dispatched a 777-member delegation to Tokyo, its largest ever participation in an overseas Games. The 431 Chinese athletes, including 24 Olympic champions, will compete in 30 out of 33 sports in Tokyo.

The Tokyo Olympic Games, attracting 11,000 athletes from 206 delegations and the refugee team, will run through August 8.

Check out the Indian contingent image: