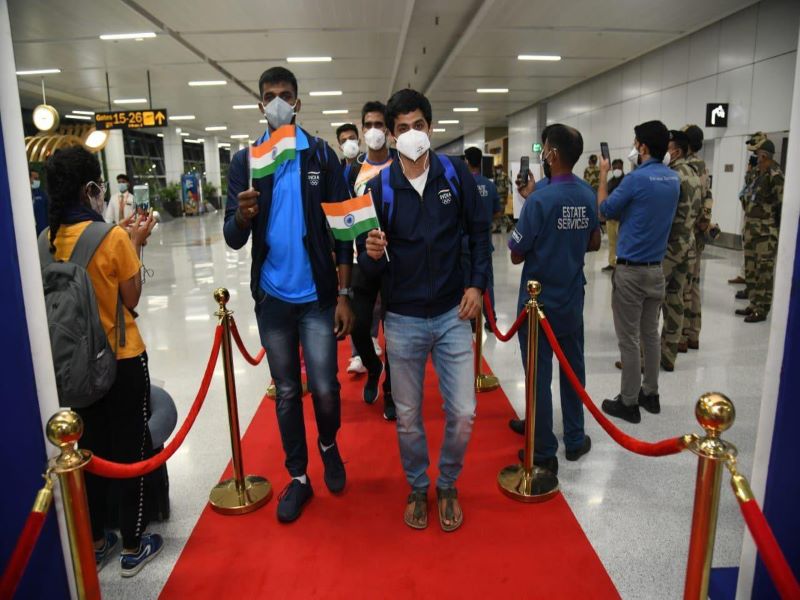 New Delhi/IBNS: Indians across the country cheered the nation's first batch of Tokyo Olympic athletes, who were given a formal send-off by Union Sports Minister Anurag Thakur on Saturday night.

A contingent of 88 members, including 54 athletes from eight disciplines besides support staff and IOA representatives, departed for the Japanese capital on Saturday night.

The red carpet is laid & the cheers are loud.

That's how our sporting heroes are being welcomed at IGI Airport, New Delhi before departing ✈️for #Tokyo2020.

India's only weightlifter in the 2021 Olympics, Mirabai Chanu, reached Tokyo on Friday from her training base in St Louis, USA.

Indian boxers have reached Tokyo from Italy and the shooters landed in Tokyo on Saturday from Croatia where they were engaged in a long long training-cum-competition stint, media reports informed.

India will be represented by a 228-strong contingent, including 119 athletes, at the Tokyo Olympics.

Good luck #TeamIndia for #Tokyo2020. Support our 127-member strong contingent in their quest to showcase the exuberance of human spirit.#Cheer4India

Former Union Health Minister also wished the Indian athletes in a Twitter message. "Glory shall be undoubtedly be yours!" Harshvardhan wrote.

Our champions head to #Tokyo to paint the world blue!