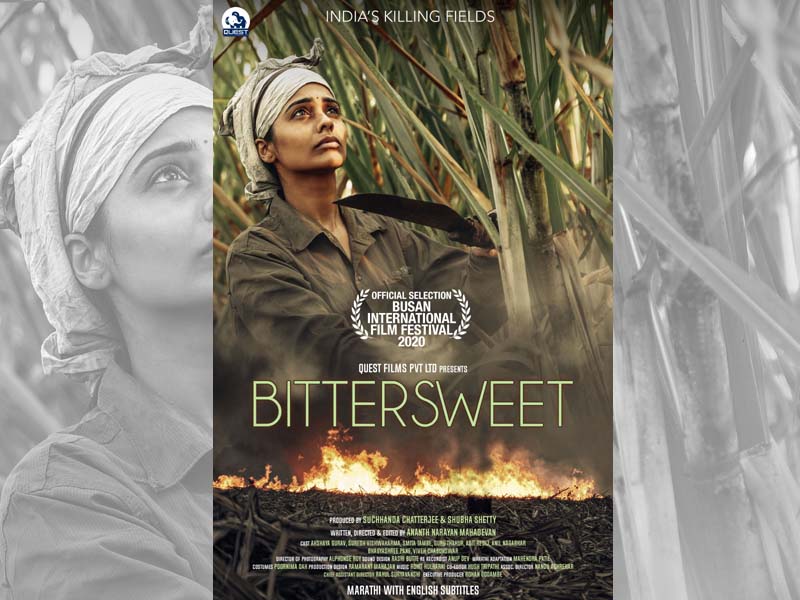 Kolkata/IBNS: Ananth Mahadevan, a theatre actor who shifted to television, cinema and OTT platforms and also turned to writing scripts, is now a reputed filmmaker in his own right.

His film Mai Ghat/Crime No 203 has been acclaimed across the world and had won a top award at the 25th KIFF.

He now comes with his latest film Bittersweet which establishes, with documented proof, that the sweetness of sugar disguises the sharp bitterness that consumes the lives of men and women, specially women, who work in the sugar farms in Beed, Maharashtra, which supplies 50% of the sugar produced by Maharashtra.

According to Mahadevan, "The concept, story and situation are hugely exclusive. Whether it is Indian audiences or international, the story of women without wombs is an eye-opener…a stunning revelation."

What does this mean? It means that young women, even unmarried ones who work on these sugar farms under very exploitative contracts, are manipulated by the contractor in a way that forces them to undergo hysterectomy at neighbourhood nursing homes "fixed" by the contractor.

The company pays for the surgery which again, is deducted from their payments.

The leave young women are forced to take because of period pains is also fined heavily.

Most of them are forced to live in temporary tenements within the farms leaving the small kids back in their slum homes who are deprived from regular schooling.

Normally, the contractor appoints labour in the form of "jodis" – couples, but exceptions are made when the male falls ill and someone else from the family steps in. Suguna, the protagonist, steps in for her father who falls sick.

Mahadevan goes on to add, "Keeping in mind global cinema and the exacting standards it calls for, BITTER SWEET conforms to the highest norms of film-making, expected to create a worldwide appeal. The approach, style and filming techniques adhere to an international meter, with focus on  the human rights issue.

"Told through the eyes of the real-life character, Suguna, making her debut screen appearance, BitterSweet unfolds the dramatic tale of a system that mocks humanity for the sake of economic prosperity. The film is a soul purging exercise, working ,both, on the level of a heart rending experience, as well as a socially relevant dynamite."

Talking about the trigger that set things in motion, Mahadevan says, "The first-person account of a cane cutter Satyabhama that narrated her ordeal along with other women led the media to a headline "Beed--the Village of Women without Wombs.

"It aroused interest and I dug deep into the dark secrets that were camouflaged amidst the glory of India being the second largest exporter of sugar in the world. I discovered the details in September 2019 and set about to write a screenplay, because this was a subject crying to be visualised on screen.”

"My previous films Mee Sindhutai Sapkal, Gour Hari Dastaan, Rough Book and  Mai Ghat  were all rooted in human stories that held an universal appeal. I believe I should be a socially responsible storyteller.

"The relevance of Bittersweet cannot be undermined. Despite living in the formula infested web that calls itself Bollywood, I have steered clear of the beaten path in my previous seven outings. Bittersweet in a way is a culmination of my efforts to chart a totally unpredictable course of cinema,” he sums up

Bittersweet is part of the Competition for Indian films at the current 26th KIFF.