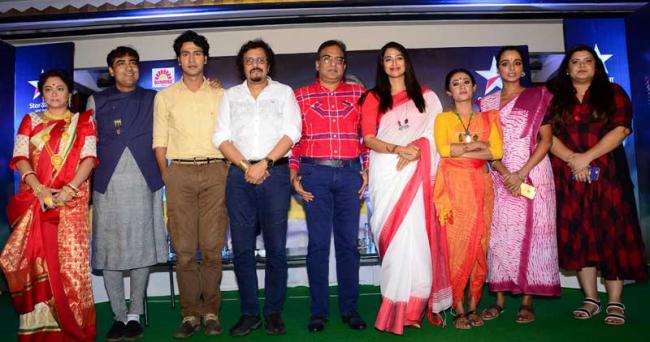 Kolkata, July 26 (IBNS): It was the medium of television that paved the way for him to scale greater heights believes well-known director Arindam Sil and therefore he has no qualms about returning to the small screen with his latest venture, 'Bhoomikanya'.

Sil is the producer and creative director of the soon-to-be aired Bengali television serial on Star Jalsha.

'Bhoomikanya' is an adaptation of Rupak Saha’s novel 'Tarita Puran' with Sohini Sarkar in the lead as Tarita.

When asked about the reason behind his return to television after successfully directing 11 films, Arindam Sil said, “I began my career in television as an actor. Whatever I am today is because of television. I started doing films a lot later. So this is my way of giving back to the medium. I feel extremely happy and lucky to do so with a show as unique as Bhoomikanya.”

'Bhoomikanya' is about a herpetologist, Tarita, who returns to her country after her training abroad, to find her ancestral home engulfed in crisis, in the vicious grasp of exploitation, trafficking, lawlessness and social chaos. The story revolves around this girl as she tries to resolve the issues against many odds.

“When the production team at Star Jalsha approached me with the concept, I didn't agree because it seemed too ambitious," said Sil. "But after three months of avoiding it, I finally gave in".

{image_1}Sil said, "The making of the series was like a film shoot. We shot it on Red, a camera used in films. We used extensive VFX, most of it is outdoor. In short, a lot of money went into the making. But I am satisfied with the product. I had found the concept attractive and I hope the audience enjoys the entire series.”

Sohini Sarkar, a popular name in Tollywood, spoke about her preparation for the series.

“The process of preparing myself starts on the set. Through the process of filming I learn things. The shooting mostly outdoors. So we faced a lot of problem because of the weather. But our team is very hard working and supportive. Overall a learning process. I would also like to congratulate the entire writing team on their brilliant work.”

Kaushik Sen talked about the quality of television shows nowadays and how 'Bhoomikanya' will raise the bar higher for Indian television.

{image_2}Roopanajana Mitra, who portrays the role of Sanaka, said, “With Bhoomikanya a new era in television will begin. I have been doing television for the greater part of my career. I can say that this show is different. Today's generation, which has a lot of choices when it comes to viewing television, is likely to find that Bhoomikanya is worth their time.”

The title track of this limited episode production has been shot in Cambodia.

Bickram Ghosh has scored the background music and the title track of the show.

“The main problem with sound in television is you are basically dealing with mono-sound," explained Ghosh. "My entire soundscape is live. So not getting a proper definition is a problem. Hence we have to work with a predominant melody or rhythm.  Creating harmonies becomes a problem on television as it creates noise, and this was a major challenge for me. However, the whole idea, which was urban yet mythological, was pretty fun for me to work with.”