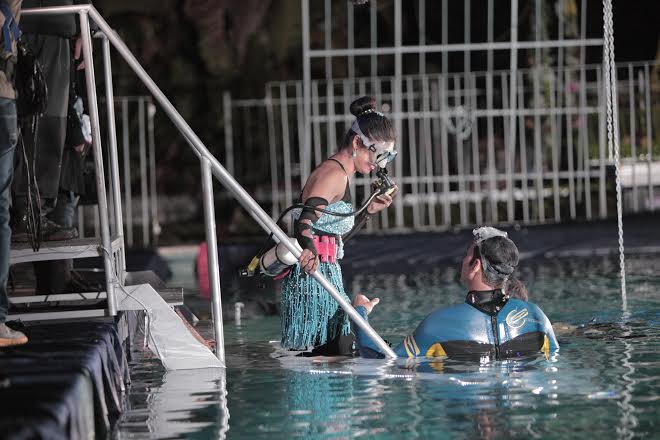 India Blooms News Service | | 25 Aug 2014, 05:16 pm
#Akshay Kumar
Mumbai, Aug 25 (IBNS) Akshay Kumar is known to push himself beyond the limits and this is exactly what the khiladi did in Cape Town during the shoot of Dare 2 Dance.

Akshay Kumar was seen challenging the contestants to perform an underwater act within a time frame of 5 minutes. To add to this, the contestants were not given any time to rehearse for the same. The temperatures were freezing as to 5 degrees and the pool had freezing water.

The contestants were in a jiffy and thought the act cannot be executed in the given time. They were provided with oxygen tanks which could last only till 7 minutes underwater and in case of panic and heavy breathing, it could reduce to 5 minutes.

This sent a panic attack to them and they did not wish to perform the act. Hearing this, the Khiladi Kumar stepped in and volunteered to perform the underwater dance sequence and prove that nothing is impossible if you set your mind to do it.

“Akshay was all dressed up in a tie and overcoat and he immediately asked for a scuba body suit with the oxygen tank and performed the act in the stipulated time. This gave the contestants the needed boast and encouraged them to do the same,” says a source from the sets in Cape Town.

Dare 2 Dance, is set to entertain with its edgy, exciting and never seen before content. The show will see contestants, comprising of celebrities and trained dancers, compete to raise the bar of dancing to a different level. Akshay Kumar who is known for his dare devil acts will guide contestants and push them to re-invent and perform in extreme dancing conditions every week. The contestants will be challenged to prove their mettle as ‘Extreme Dance Ke Heroes’ in a hope to rise above all odds.

Dare 2 Dance is being shot in Cape Town, South Africa and the show is slated to go on air on 6th September on Life OK