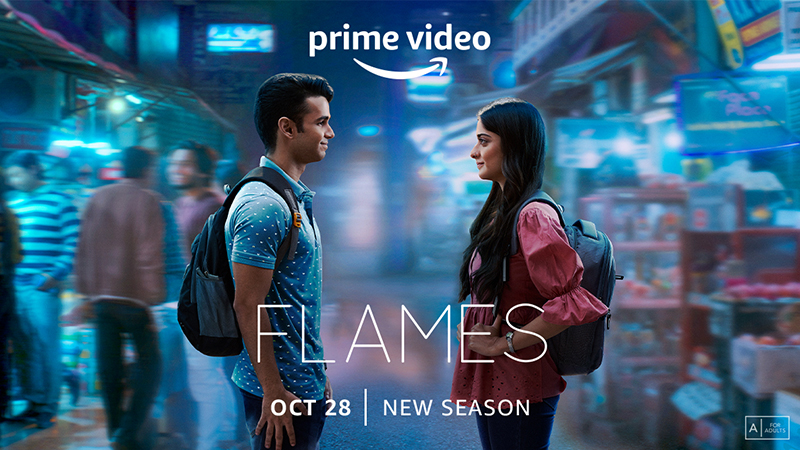 Mumbai: Prime Video on Friday dropped the trailer of the new chapter for the young romantic drama Flames which will be exclusively available on the service from October 28.

Headlined by Ritvik Sahore and Tanya Maniktala, Flames is a heart-warming story of teenagers, Rajat and Ishita, who will be seen dealing with the bigger challenges and obstacles as a couple together. Created by TVF (The Viral Fever) and directed by Divyanshu Malhotra, the series also features Shivam Kakar and Sunakshi Grover in pivotal roles.

After a rollercoaster journey from crushes to lovers, Rajat and Ishita have come a long way in finding their way through the initial challenges of dating. The trailer of the new season gives an insight into the myriad of emotions that the couple will face as they move forward in their lives. As the students prepare themselves for the 12th boards, will their love be able to weather the anxiety of exams and uncertainty of the future?

“Rajjo and Ishita are a couple that all of us would have crossed paths with as teenagers. The beauty of these characters lies in how easily they keep us invested,” said Vijay Koshy, President, The Viral Fever.  “Audiences often relate to them and hope for all of their problems to go away. That is the sort of connection these characters form with the viewers. The third season of FLAMES is bigger and better in terms of the story, the journey of the characters, and the twists and turns the season would see. We are glad to associate with Prime Video, whose global presence and commitment to take compelling narratives far and wide will make such a relatable story accessible to viewers around the world.”

“Season 1 and 2 of FLAMES has received immense love from its audiences and emerged as a favourite series among youth. So, when I was asked to direct the new season it was exciting as I had to ensure it lives up to fans' expectations along with presenting a new arc”, Divyanshu Malhotra, director of season 3 of Flames says, “Season 3 of Flames is a natural progression in the relationship of Rajjo and Ishita as they enter a new phase of their lives and experience a different kind of turbulences, bringing the slice of life element to the series.”

Flames Season 3 will globally premiere on Prime Video on October 28 across 240 countries and territories. The previous seasons of the romance drama will also be exclusively available on the streaming service from October 28 onwards.