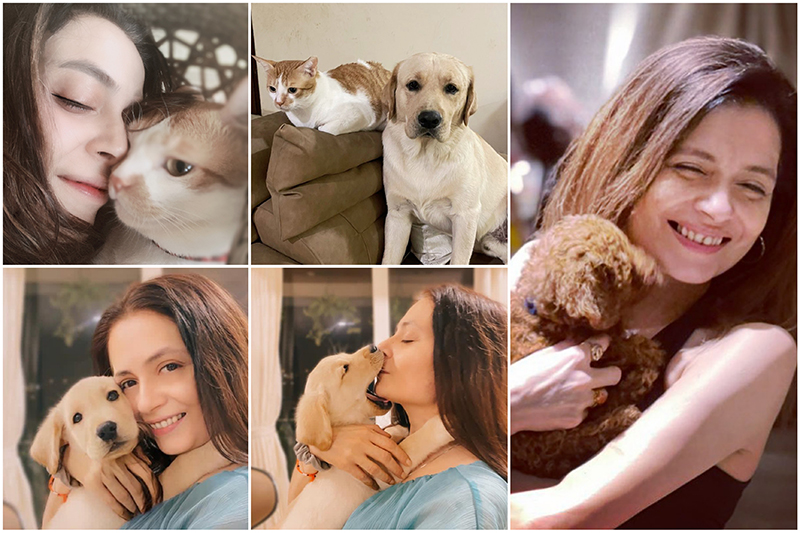 Samyukta Singh opens up about her love for pets

Mumbai: Actress Samyukta Singh’s association with animals, especially dogs goes back a long time. She has two pets at the moment and loves them to bits.

“I am an animal lover for sure. Right now, I have two pets, a one-year-old Labrador whose name is Pacino and a two-year-old rescue cat who was given to me when he was barely a month old. His name is Coco,” she says, adding, “I have loved animals since childhood, mostly dogs. My first pet was a Pom. His name was Fluffy. I got him when I was in school. Then I had my earth-angel Husky. He was a golden retriever. He passed away about 8 years ago and is the main reason for me to get into the protest against Yulin dog/cat eating festival and the Kerala dog culling, and giving up non-vegetarian as well.”

She has always supported animal causes.

“I joined a group of activists and some celebrities against the fight to stop the culling of stray dogs in Kerala. We did quite a good job to bring awareness to people who were clueless as to what was happening. We had a lot of celebrities who did video bytes for us, including Varun Dhawan and Anushka Sharma. We also recorded a beautiful song but, unfortunately, we couldn’t shoot or release it,” she says.

In fact, she has even started eating vegetarian food because of her love for animals.

“When my Husky passed away and I got into an online protest against the Yulin Dog Eating Festival, I got to see a lot of atrocities that these wicked people were doing to helpless animals. That's when I decided to give up non-vegetarian food. I still cook, but I cannot get myself to eat any meat anymore. I don’t want to be a preacher because I have eaten non-vegetarian food all my life. But it’s just an internal repulsion I get with the thought of it now, it’s a personal thing. Animals are so beautiful and dogs are the purest form of unconditional love. My Pacino is a gangster and thinks he owns me and I love it. I never thought I could love a cat as much as I love Coco. He was so tiny when I got him.  How can people be so cruel to another living thing? Honestly, I wish I could do more for animal rights. Right now, I can only do what’s in my capacity," she says.

Bengali black comedy Gopone Mod Chharan shooting on in south Kolkata house 01 Jan 1970, 05:30 am
Related Videos
Trailer Of Alia Bhatt's Gangubai Kathiawadi 04 Feb 2022, 01:52 pm
Dubbing scenes from Mimi Chakraborty starrer Mini 04 Feb 2022, 12:09 pm
Homecoming Trailer 02 Feb 2022, 07:10 pm
Latest Headlines
Sai Deodhar on being part of Mitu's Nishabd: I was completely bowled over when I heard the story Fri, Jun 24 2022
Pyaar Ka Pehla Naam Radha Mohan actor Kajal Khanchandani: If the story, characters and execution are on point then the show will get appreciated Fri, Jun 24 2022
Sudhanshu Pandey: After Anupama, I realised how incredibly popular television can make you Fri, Jun 24 2022
Chitra Vakil Sharma talks about her association with singer Eklavya Sakpal! Fri, Jun 24 2022
I was not apprehensive at all: Tarun Anand on being a part of 'Nishabd' Fri, Jun 24 2022
I was taken aback by the character and wanted to be a part of it: Vijay Verma on 'Ishqiyoun' Fri, Jun 24 2022
Gautam Chaturvedi on taking up Nishabd, a show based on LGBTQIA+ community: There was no apprehension… was happy to take up on the offer Fri, Jun 24 2022
Ashoka Thackur gets candid about his new music video Rangrasiyaa Fri, Jun 24 2022
Keerti Nagpure talks about her show Pyar Ka Pehla Naam Radha Mohan produced by Prateek Sharma! Fri, Jun 24 2022
Samyukta Singh opens up about her love for pets Tue, Jun 21 2022