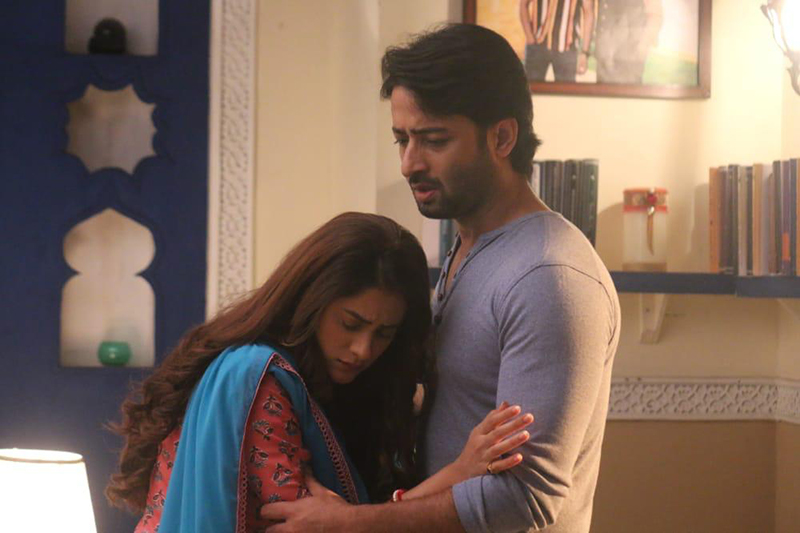 Mumbai: The Friday episode of Rajan Shahi's "Woh Toh Hai Albelaa" started with Sayuri and Kanha going to their room.

The room reminds Kanha of Cheeru and he leaves from there.

Nakul takes Sayuri inside and tells her that he will always be there to support her and whenever she needs him she will always find him with her.

He shows her around the room and asks her to feel at home.

He tells her that if she needs anything she can always call him. They then look at a painting which Sayuri had made as a kid. Sayuri tells him that Kanha and Cheeru had helped her make it and Kanha spent the whole night finishing it, and she got the first prize for it. Nakul tells her it was Kanha who got the painting framed and tells her that one day she will herself accept how good a guy Kanha is.

Meanwhile, at the Sharma house, Indrani tells the family that she won't let Sayuri do anything for them. Priya and Rashmi offer to help by finding jobs. They are worried about Sayuri but Bhanumati tells them that Kanha is with her and they don't need to worry about her.

At the same time, Kusum tells Saroj that it will be difficult for her to tolerate Sayuri in their home. Saroj tells her that she won't allow her to go in the kitchen or the temple. She then calls Anjali and asks her to come.

Later, Nakul goes to Kanha and they talk about making Sayuri feel comfortable. Kanha asks Nakul to not grow up ever because there is no fun in that. After a while, Sayuri is trying to find the switch when Kanha helps her. She was about to slip but he held her. Kanha then tells her that the room is hers and she can live there comfortably. He tells her that she can call him or Nakul or just give a missed call to him if she feels uncomfortable calling him. Sayuri asks him to not be so good with her, but Kanha tells her that he will take care of her till he dies. He leaves the room.

Sayuri opens her suitcase and finds a photo of her family and hugs it. She is unable to sleep and Kanha too cannot sleep. The next day he went to wake her up, but couldn't get any response. He feels she is still asleep and he too sleeps outside the room while waiting for her.

In the upcoming episode, we will see that Sayuri serves breakfast to everyone at the dining table while ensuring her pallu doesn't fall off her head. Kanha asks her to not do anything under pressure and do only those things that she wants to. Sayuri sits to have breakfast but Saroj tells them that neither she nor her plate go into the kitchen. The Chaudhary men get upset with this and leave for work empty stomach. Saroj blames it on Sayuri and tells her that she will not eat or drink anything. To know what happens next, keep watching the show.

Bengali black comedy Gopone Mod Chharan shooting on in south Kolkata house 01 Jan 1970, 05:30 am
Related Videos
Trailer Of Alia Bhatt's Gangubai Kathiawadi 04 Feb 2022, 01:52 pm
Dubbing scenes from Mimi Chakraborty starrer Mini 04 Feb 2022, 12:09 pm
Homecoming Trailer 02 Feb 2022, 07:10 pm
Latest Headlines
Sai Deodhar on being part of Mitu's Nishabd: I was completely bowled over when I heard the story Fri, Jun 24 2022
Pyaar Ka Pehla Naam Radha Mohan actor Kajal Khanchandani: If the story, characters and execution are on point then the show will get appreciated Fri, Jun 24 2022
Sudhanshu Pandey: After Anupama, I realised how incredibly popular television can make you Fri, Jun 24 2022
Chitra Vakil Sharma talks about her association with singer Eklavya Sakpal! Fri, Jun 24 2022
I was not apprehensive at all: Tarun Anand on being a part of 'Nishabd' Fri, Jun 24 2022
I was taken aback by the character and wanted to be a part of it: Vijay Verma on 'Ishqiyoun' Fri, Jun 24 2022
Gautam Chaturvedi on taking up Nishabd, a show based on LGBTQIA+ community: There was no apprehension… was happy to take up on the offer Fri, Jun 24 2022
Ashoka Thackur gets candid about his new music video Rangrasiyaa Fri, Jun 24 2022
Keerti Nagpure talks about her show Pyar Ka Pehla Naam Radha Mohan produced by Prateek Sharma! Fri, Jun 24 2022
Samyukta Singh opens up about her love for pets Tue, Jun 21 2022