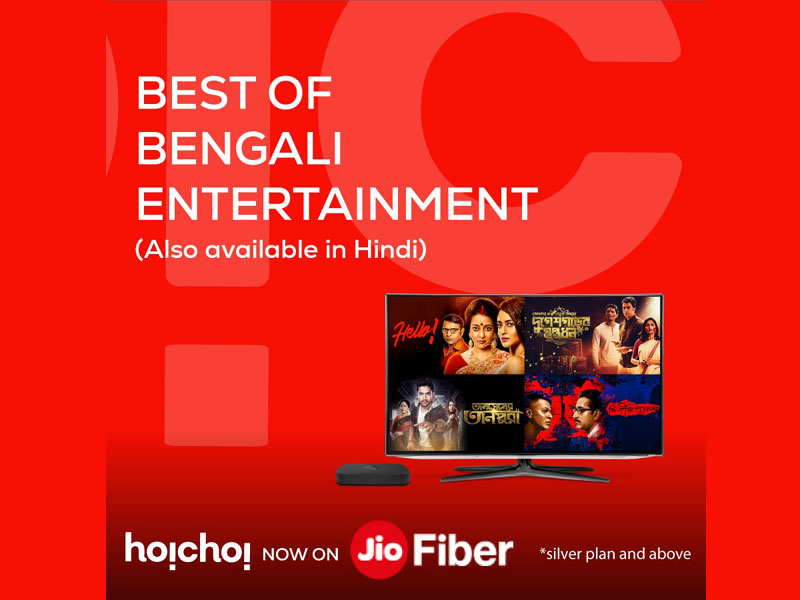 hoichoi is available for the subscribers of JioFiber

JioFiber customers on Silver and above plans, will have access to over 2000+ hours of Bengali movies, Original Series and a wide array of content through the hoichoi Platform on their Jio Set- Top Box. Additionally, Bengali and Hindi Original Series of hoichoi will also be available through the JioTV+ app.

The subscribers of JioFiber can watch some of the most iconic Bengali Movies of all time including latest blockbusters and World Digital Premiere Dwitiyo Purush, Love Aaj Kal Porshu, Nagarkirtan, Konttho, Vinci Da, Shah Jahan Regency, Kedara and others along with evergreen Classics by Satyajit Ray, Ritwik Ghatak, Uttam Kumar among others and even 60+ Original Series – Hello, Byomkesh, Shobdo Jobdo, Charitraheen, Eken Babu, Montu Pilot – to name some of the cult ones. Being a customer-centric platform, hoichoi continues to add World Digital Premiers, Movies and Original shows in its repertoire, every month.

The first venture is a film produced by the Biggest Entertainment House of Eastern India, SVF, titled ‘Detective’, based on a story by Rabindranath Tagore of the same name; the film will be releasing on 14th August.

The entire content library of hoichoi is available with English subtitles; additionally, hoichoi features Hindi dubbed versions of its Originals that allows a wider National audience to enjoy the best of Bengali content and takes the platform to a national audience.

As the world adjust to the new realities of work and entertainment from home, Jiofiber, with its high-speed broadband and set-top box service is best suited to meet both the needs. Users can watch premium content from hoichoi on a large screen from the comfort of their homes.

To add onto this further benefit of our subscribers, Vishnu Mohta, Co-Founder of hoichoi said, “JioFiber users can now access the hoichoi platform and also some hoichoi content from JioTV+ app from their Jio set-top box. Combining efforts with another distribution platform will build a wider audience base and a powerful partnership as our content options are unlimited, when it comes to entertaining audiences globally. This vast array of exclusive content will be accessible to a large base of users through this association.”