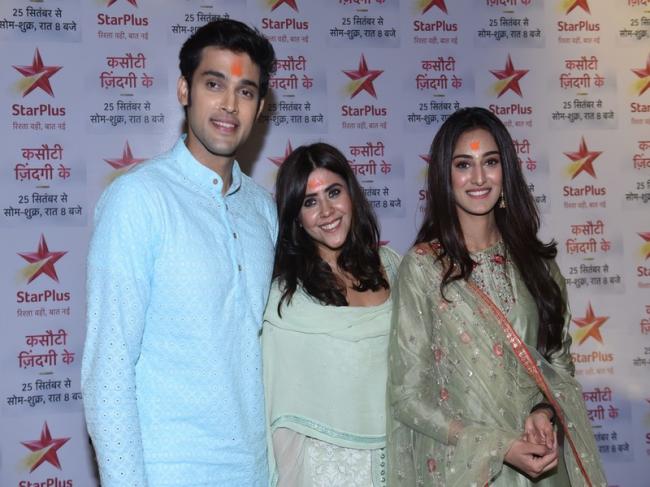 Kolkata, Sep 6 (IBNS): Director-producer Ekta Kapoor is set to re-launch one of her successful daily soaps Kausautii Zindagii Kay on television but with a different story line.

The lead characters (Prerna and Anurag) of the Hindi serial will be played by Erica Fernandes and Parth Samthaan.

Speaking about the casting at a press conference in the city, Ekta said: "I waited patiently for Erica’s show (Kuch Rang Pyaar ke Aise bhi, daily soap) to get over and I told her that I had a special project for her in mind."

"I was getting a lot of good-looking, body-builder types of men during the audition of Anurag’s role, but when I saw a picture of Parth Samthaan, I decided in just 5 minutes that he would fit perfectly in Anurag’s shoes."

The serial will be aired from Sept 25.

Commenting on her role, Erica said: "My character is somewhat similar to the old Prerna because both of them seem to be strong-headed and independent women,’ on being asked what similarities does the 2001 cult serial and the present one have in common."

Parth, who has researched for portraying Anurag's character, said: "I have done a lot of homework and have analysed Anurag’s character a lot. The best part I like about him is his simplicity, so I will try my best to serve justice to Anurag’s role."

Ekta said the viewers will be thrilled to watch the onscreen chemistry between Erica and Parth.

The serial will run from Monday to Friday on Star Plus.

The first part of Kasautii Zindagii Kay was aired first in 2001. The serial continued for about seven years on the same television channel which will air the latest edition.