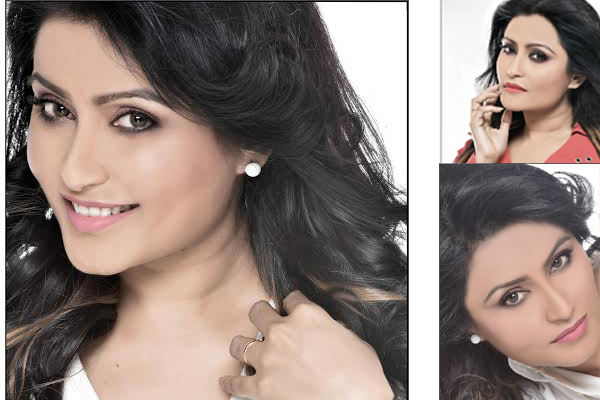 India Blooms News Service | | 23 Feb 2017, 04:13 pm
#DeshaaNandi, #NayikarBhumika, #BengaliCinema, #KananDevi
Model turned actress Deshaa Nandi says patience is a virtue that helps one to survive in the showbiz industry, overpowering cut throat competition. She talks about her career, her switch-over from small to big screen and how men make better friends than women, in a candid conversation with IBNS correspondent Tanushree Sen.

So, I believe you just completed your first Bengali film. What was the experience like?

The film is called ‘Nayikar Bhumika’, and my character is called Rukmini Sen. I play the role of a director. Though this was my first Bengali film, it didn’t feel like my first one and I gained a lot of experience and learnt so many new things. Being from the world of modelling, acting is a different job altogether, and this was a good experience for me.

Yes, I am. This is my first Bengali film, and I haven’t seen the screening yet because I was in Mumbai. There is a lot of pressure.

Was it easy then? Switching from posing to acting in front of the camera?

I believe you’ve also done a Telugu film. What was that like?

Yeah, I did a Telugu film in 2014. It was a completely different experience compared to working in a Bengali film. People out there are much more professional than they are here. In that way, it was easier to work with them.

But being a Bengali, didn’t you have any problem with the language?

Not really, no. What happens is they use a lot of dubbing, so my problem was instantly solved. And moreover, their script was written in English, though the words were i Telegu. And they were so cooperative with us lead characters, that we had a ball shooting for the film. The film was shot in the outskirts of Bangalore, in a place called Anantpuram, and whenever my scenes would go on, all the people would come and watch and cheer and laugh. My character was very funny. It was an extremely memorable experience for me.

So, coming back to the Bengali film, tell us how you got the role.

My friend had recommended me for this role. We were also friends with the producer and that helped immensely.

When did you realise that you were cut out for the entertainment business?

Since childhood. I always had a desire to be a part of this glamour industry. Being a dress designer was also one of these desires. I was into group theatre for a while. People would mention that I had a photogenic face and that I should try out modelling. My first shoot was for ABP. I’ve also shot for Khadims, JKB Opticals, Tata Steel, Sananda magazine, D K Basak jewellery etc. From there I went to Mumbai. I’ve worked with Balaji, Sahara, Godrej, Bajaj scooty etc. Also, the fact that my maternal grandmother is Kanan Devi, was hugely inspirational for me to be a part of this industry.

How was that experience like? Working in Mumbai? Being the ultimate destination for all people striving to be a part of the city, how different was it from Kolkata or any other place?

People are so much more professional over there. A lot more focussed. No one is bothered with who is doing what. It’s only about the work there.

But is it difficult to survive over there, with so much competition. Do you agree?

Yes, I do. All the big banners and brands are there. It is quite difficult to get into those houses. Even for TV shows, while it is not impossible to get work, you have to make sure you are on the right track and with the right people. That is extremely important.

Did you also face the struggle?

Yes, I did. And more so because I had no godfather and I was primarily an outsider. I had also done an acting course from Namit Kishore’s institute and at that point, that was the only famous film institute there. Many famous celebrities have graduated from there, including Hrithik Roshan. Now obviously there are so many acting schools.

Did you speak to Hrithik? What was he like?

One story he shared with us was that of his father. In his initial days, after he graduated from acting school, he would assist his father and in those days, he wouldn’t get the car. He had to travel by bus or auto and it was only after his first film that he could drive his own car. He was extremely humble and down to earth.

Tell me a little about your acting stint in Mumbai.

I worked for Sahara for a horror show for two years. It was a great experience and the show was very popular. But I fell sick because of the hectic as well as erratic schedules. I was eating on time and exhaustion got to me. That is when I decided I would stick to movies. There is also another thing that I believe, that if you land the main lead in a TV show, it becomes very difficult to land the main lead in films because getting the lead role in a Mumbai TV show means that you will be famous all over India. The TV industry is that well developed over there. So I decided to primarily to stick to films.

So, having survived in this industry for so long, what is the one thing that you’ve learnt?

Patience (laughs). You need to have loads and loads of patience. Otherwise you will become completely frustrated.

There is a conception that women cannot be friends in this industry. Do you agree?

To an extent, yes. I have more male friends than female. May be because women are rather insecure at one level which gets in the way of friendship. Men are insecure and competitive too, but not to such an extent. Extreme competition is a reason why a lot of politics and manipulation takes place.

Having said that, do you wish you could go back and undo anything?

No, not at all. I don’t have any regrets. I sleep very peacefully at night (laughs).

Coming to your personal likes and dislikes, what are your favourite brands among cosmetics and clothes?

I’m not always brand conscious. Whatever is comfortable and suits me, I wear that. Amongst cosmetics, I like to use Bobbi Brown. In clothes, Vero Moda, Burberry, Forever New and Zara and Guess for jeans are my favourite because their fittings are excellent. There are many brands abroad which are not there in the country and whenever I go to Dubai or the UK, I shop from those. For sarees, I have my Sabyasachi and Manish Malhotra collection.

It isn’t anything very rigid. Just the basics, eat every two hours, avoid fried and fatty food etc. I have a sweet tooth but I try to have sweets in the morning because you can burn it out during the day. Apart from this, the celebrity dietician Rujuta Diwekar is a close friend of mine. We go back since 2005. Even now we often go for these wellness sessions together.

And finally, what are your future projects?

There are several projects in the pipeline. Talks are on with some directors. Hopefully, something will work out soon.