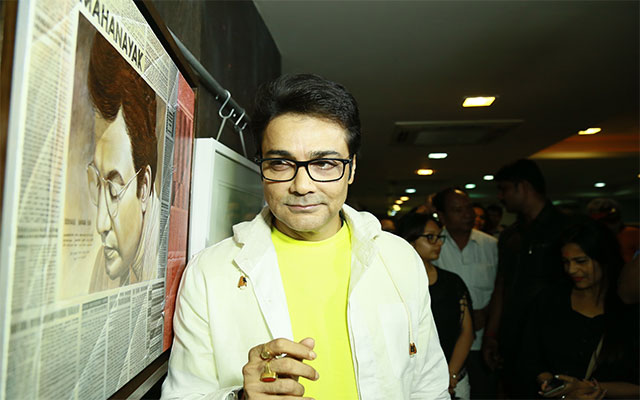 At the starry evening of art and culture  organised by Artmikado.com, an e-commerce site for affordable artwork, the show ‘Pride Of Bengal’16’, was opened by Prosenjit Chatterjee who himself now essays in the small screen the role of an yesteryear hero inspired by the life and time of legendary Uttam Kumar. The actor spoke about his deep love and respect for the late screen star, adding that the paintings had indeed captured the brilliance and magnanimity of the larger than life actor. The art exhibition held at Mukti World Banquets boasts a collection of around 25 portraits of the Mahanayak, in different moods and shades. While some paintings depict the star in a deeply pensive mood, done in charcoal and pencil, other watercolours seem to catch him in a lighter moment, smoking his trademark cigarette. Some of the artists who have contributed to the exhibition are Ahana Sen, Amit Kumar Mistry, Bipul Roy, Dipa Talukdar, Joydeep Dhar, Salma Sultan among several others.  While it is very difficult to capture an artiste’s essence and magnitude in a single frame, the works do precisely that, depicting the poignancy and charm inherent in the late actor, said the organisers.  Rishi Jain, the director of Artmikado.com and executive director of the Jain Group, said that the reason for choosing Uttam Kumar was simple; he is one of the most memorable, larger than life icons of Bengal and Bengali cinema, and there could be no better amalgamation ofart and cinema. The young entrepreneur also spoke about his love for art, especially nature themed works, saying that the chief thought process behind Artmikado.com was to reach out to aspiring artists by giving them a global platform to showcase their talent and innovation and connecting them with art lovers and enthusiasts simultaneously. The e-commerce portal has an exhaustive variety of art works, of a diverse range. "Technology is a major catalyst for showcasing this latent talent and providing opportunities to artists on a global scale," said  Jain while attending to all his guests even as he spoke to journalists in between.  Not just restricted to Uttam Kumar, the exhibition also showcases around five hundred paintings done by various artists from around the country.  Art enthusiasts surely have a reason to celebrate now.