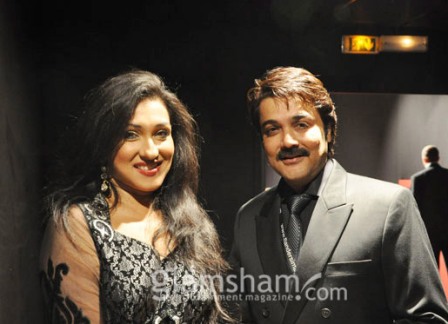 Prosenjit-Rituparna come together on film premiere stage after ages

India Blooms News Service | | 28 May 2016, 09:41 pm
#Prosenjit, #Rituparna, #Praktan
Kolkata, May 28 (IBNS) Sharing public stage for a film premiere,15 years after their last coming up together, Bengali cinema's loved couple Prosenjit-Rituparna on Friday promised to come up together again in strong content films matching the vibe of 'Praktan'.

A beaming Rituparna tells the audience, "So we are now back after a long gap. The most popular jodi in the 90s era is back. We had been waiting for this evening, for the very moment  like our countless fans."

"I am looking forward to this journey as both of us evolved in all these years. But again it depends on how our pair is taken by the audiences," Rituparna, also flanked by daughter Rishona and singer Anupam Roy, says.

Actor Prosenjit, referring to the 'x-factor', says there is an ex in everyone's life and the director duo cashed on both on-screen and real life characters while Praktan talks about the ex in two person's lives.

Veteran film actress Sabitri Chatterjee says by becoming the on-screen wife of thespian Soumitra Chatterjee in the film, she felt they were the most happening 'jodi' bringing back the notalgia of the sepia-era Bengali films.

"I have great affection for Bumba (Prosenjit). Teaming up with him and Soumitra made me greedy for more such roles," Sabitri says.

Produced by Windows, filmmakers  Siboprosad-Mukhopadhyay-Nandita Roy's Praktan enjoys the distinction as the first ever Bengali film to be released simultaneously on a single day,

"To my knowledge, no other Bengali did have such unique distinction," Rituparna said.