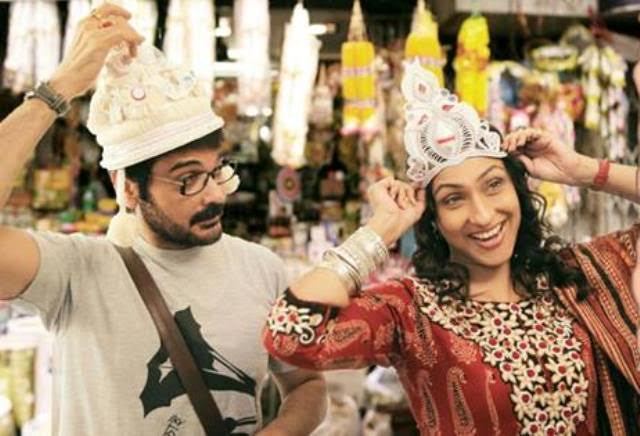 Smiles director Shiboprosad Mukhopadhyay of the director duo Shiboprosad-Nandita (Roy), “Bumbada (Prosenjit) took the lead in hosting the birthday celebrations and Ritu-di fed him cake after 15 years. The chemistry of these two actors looked unbelievable. From the very first shot it looked like they have been working regularly.”

Chips in Prosenjit, “Remember me and Ritu (Rituparna) had gifted superhit films which ran at theatres for 25 weeks, 50 weeks in those days. Not days but weeks.”

“Yes, both of us have moved on after that. Both me and Ritu have since took to a different genre of films separately. Ever since our kitty of films had vastly changed,” Prosenjit, who had delivered a string of hits with Rituparna including the super-duper Sasurbari Zindabad in 2000, tells IBNS at the trailer launch of Praktan at London Paris Mukti World  Kolkata.

Reminded about Utsav by Rituparno Ghosh in the same year where he and Rituparna were cast along with Arpita Chatterjee (now wife of the superstar), Prosenjit says, “Yes apart from Utsav all other films of us had been in the mainstream format and in those days all did exceedingly well at the box office."

“Ritu (Rituparna) has since then done a number of different films as well as me which had been well received by the audiences. I believe people are no more interested to see larger than life roles these days like they (masses) used to in those times. People want to see the actors in natural looks wearing jeans and tee shirts and not in commercial looks,” Prosenjit, getting rave reviews for his naturalistic performance as a partition-affected school teacher in Sankhachil, says.

“You will again see me in a de-glam look in Praktan which heavily draws on human relationships. This is the present trend where we act no more as superstars but as actors. In Bollywood there are such actors like Nawazuddin Siddiqui,” Prosenjit says.

Rituparna says, “Both of us (Prosenjit and she) have been doing our job (in respective projects)  all these years and yes we had been a successful jodi [pair] in those days."

“And this film, which captures beautiful moments as is the hallmark of these two directors in all films, is important for me with both Prosenjit Chatterjee and Soumitra-kaku (thespian Soumitra Chatterjee) as my co-actors,” she says about Praktan.

Shiboprosad says, “When Rituparna-Prosenjit had worked there was no multiplex, no FB or whatsapp, no smart phone. Now in the present age a film has to ape the FB language in cinematic terms. The age when a hero like Aamir Khan can essay the role of a father without any hesitation.”

Praktan is produced by Windows Productions and slated to release on May 27.