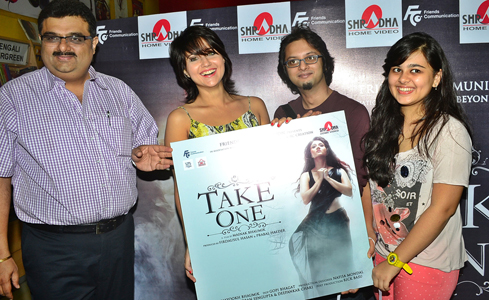 Actress Swastika Mukherjee, her daughter Anwesa, who had played an important role in the film, and Bhowmick launched the home video.

The home video was launched by Shradha Video.

“Take One has been a special film to me. It has grabbed the attention of audience in theatres for more than 4 weeks and too not just in Kolkata but also in the other districts like Bankura. I really feel proud to launch the home video of this film,” said Swastika.

When asked about the success of the critically acclaimed film, Anwesa  said, “I had never thought of working in films, I was surprised when Mainak approached me for playing Doel Mitra’s daughter in Take One. It has been a wonderful experience working with my mother which was inspiring to me. While shooting we have shared wonderful moments. Today I really feel proud to be a part of this DVD launch.”

The DVDs and VCDs are priced at Rs. 299 and Rs.125 respectively. It will be available in M3 and  across all other leading music stores.