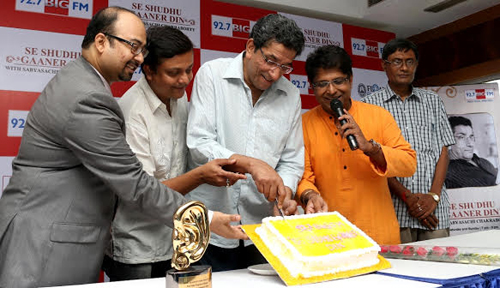 The actor was felicitated by RJ Sumanta who also happens to be the Programming Head of the show.

Sabyasachi Chakraborty, who is also called as ‘Felu Da’ for essaying the role of the detective, said, “This show has transformed me from ‘Felu Da’ to ‘Golpo Dada’. Every time I take out a new story from my story bag which consists of  cinematic facts and songs.”

The event was hosted at Floatel on the river Hooghly by the popular RJ Kaushik.

He said, “Se Sudhu Gaaner Din is a different journey and this win has proved that old is gold.”

According to the hosts, the programme is a bit different from other programmes, since it is a blend of evergreen classic songs from the Golden Era along with countless interesting stories behind the songs, narrated by Sabyasachi Chakraborty which gives it an edge over the others.

“The job of an RJ is tough. The way an RJ does the ad libbing is much different from what the actors do. The success of the programme is because of its wonderful script,” said Sabyasachi Mukherjee giving all credits to the script writers, Siddharta and Swagato.

Siddharta, who is one of the script writers present, said, “The programme is a blend of feelings with songs which has made it the best. Now that we have won the first position, we are looking forward to retaining it.”


The programme  ended by cutting of a cake by Sabyasachi Mukherjee that had the name of the show creamed on it.

Se Sudhu Gaaner Din is aired every Saturday from 7 pm to 10 pm.