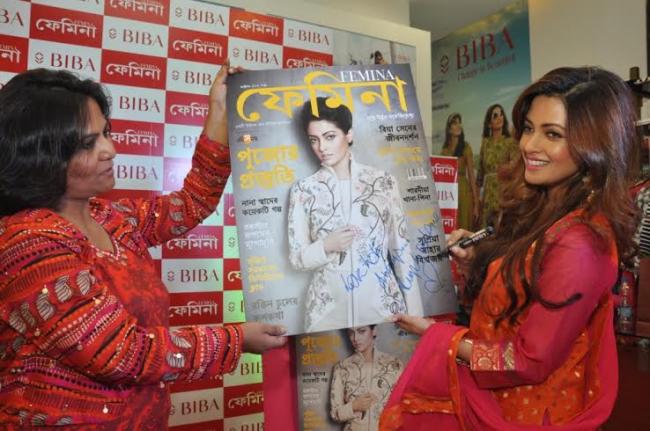 I go for mix and match in styling : Riya Sen

Riya, who is currently shooting for Agnidev Chatterjee's 'Dark Chocolate', loosely based on sensational Sheena Bora death case, takes time off to speak to IBNS at the launch of Femina Bangla puja special edition.

Asked about her take on branded and unbranded clothes, Riya said "It's a mix of both. Depends on what you like to do."

"For me it is a mix of both. I wear everything as a person what I feel suits me. It is the same for everybody," said Riya, who rates white, black, red, navy blue as her favorite colors.

"Yes I like yellow for all seasons," she added as an afterthought.

Riya, who launches the Femina issue at a Biba store in a mall, said on the sidelines they (Biba) have a great range having tied up with leading fashion designers.

"But today's designers are not solely catering to the ramp but the public as everyone wants to look good and wears beautiful clothes from a sales girl, a nurse, to an executive, a journalist, in short everyone. Everyone has the right to look good," she said.

About fusion trend, she said, "I think fusion is good, but be simple."]

On the way to look in shape in the coming festive season, Riya says, "Have shower twice. Look clean and feel clean. Have less make up and wear light color clothes only.

"And yes eat healthy," she added.

"People should wear colors," she suggested when asked what could be the ideal color tones for dusky complexion girls.

Apart from the Agnidev Chatterjee film, for which she is excited, Riya is also turning up in another Bengali project Marichika where she is pitted with Indraneil Sengupta.