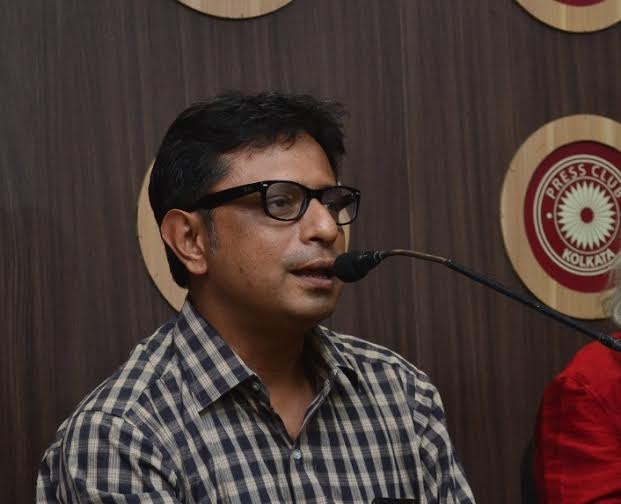 India Blooms News Service | | 31 Jul 2015, 12:03 pm
#Rupankar Bagch, # National Award, # Chotuskone
Kolkata, July 31 (IBNS) As he completes 20 years of his career as a singer, at a felicitation event, the hugely popular Rupankar Bagchi says he is not sure if getting National Award for his playback in the "Chotuskone" has actually brought him closer to the loyal audiences.
"I at times wonder if  the National Award has aided in raising my popularity graph or done the reverse," Rupankar says in a lighter vein in reply to a comment by a stage anchor at a function 'Rupankar Bagchi Poneroy Bish' here.

In the same vein, the  'Tui Jabi Kato Dur', 'O Chand',  'Anmone Amake Bhabo', singer says, he thinks the craze for basic song album in Bengali is lesser as compared to film music.
Rupankar, who jocularly says his songs invite yawn from the audience, also feels instead of blaming the listeners for buying pirated CDs the supply has to be choked.
"I myself used to buy pirated cassettes from Free School Street stalls at my younger age. I grew up as a singer at a time when piracy was at rise. So instead of asking the people not to get pirated versions we must ensure they don't have to, by stressing on the clarity and quality factors. That will make all the difference for discerning
audience."
Asked if he did not believe in PR, Rupankar says, "It will be a travesty of fact if I declare I hadn't done a little bit of PR. But may be I lack the finesse and so I have lesser friends."
"I am an introvert person. Yes I have good friends in the industry, but there are more friends outside this fraternity with whom I spend time. And they are the ones I would bank on more during hours of crisis," he signs off at the function organised by leading jewellery chain Shyamsundar Jewellers.
Rupankar, who feels his singing can't be complete without rendering Tagore numbers, regaled the audiences with 'Amaro Parano Jaha Chay', with modern instrumentation following the launch of an album of his songs by Asha Audio.
Asked if he had a wish, Rupankar smiles, "Will like to have a name starting with A in my next birth."
Related Images