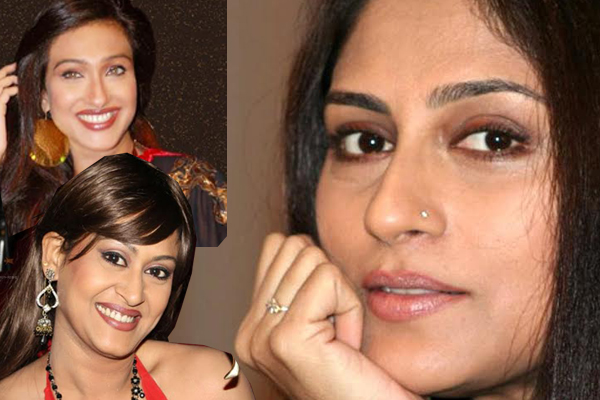 India Blooms News Service | | 24 Jul 2015, 01:15 pm
#Tollywood, # Bollywood film, # Indrani Halder, #Rituparna Sengupta, # Roopa Ganguly
Kolkata, July 24 (IBNS) Sleek productions, shoots in foreign locales, Southern style mounting and a new breed of actors with toned up physique define contemporary Tollywood. But when three leading ladies of the industry in their mid-career come together on the sets of a film, the chemistry it seems can take on the newbies.
Sharing screen space with Indrani Halder and Rituparna Sengupta- both National Award winners- for the first time in under production 'Aro Ekbar', actor turned politician Roopa Ganguly, known for her portrayal of Draupadi in the tele-serial, says their off-screen camaraderie gets reflected on the screen portrayal of three friends catching up in the middle phase of their career.

"Me and Ritu and Indrani are almost the same generation with me and Indrani a few years senior to her. As friends we get connected and we have a bonding," says Roopa Ganguly.
All three actors have their share of national fame having worked in Bollywood film and TV industry, but always choosing to return to their roots in Bengal.
Many a time they have bought my favourite brand beauty product from Mumbai when I am stuck in Kolkata but the problem remains they refuse when I want to pay. We share such vibes which you people define as chemistry or whatever," Roopa told IBNS on the location shoot of the Arijit (John) Halder directed film in Joka.

Roopa, who fondly describes Rituparna as 'khub ucchal' (very joyous kind), says when we catch up we do wacky things like asking the director to stop the production caravan and we get down and savour phuchka. "We feel rejuvenated in each other's company."

"And I guess you could sense that in the shoot where we are playing a game of ludo as we blame each other of cheating. It's a very natural thing between friends during a game like ludo. That adds up to the fun element," she says.

Affirming she has only taken up films which enthuses her, Roopa says from "Nayanchapa Dinratri" to a theatre figure in "Natoker Mato", the range of her roles were varied. The same is true in "Aro Ekbar" where the story rocks and the audience gets pure homour."

Dahan actor Indrani Halder says she is working with Rituparna for the second time after the  1997 Rituparno Ghosh film that fetched both of them a National Award each.

Aro Ekbar, having singer Smriti Lala  as music director, will be released by this year.
Related Images