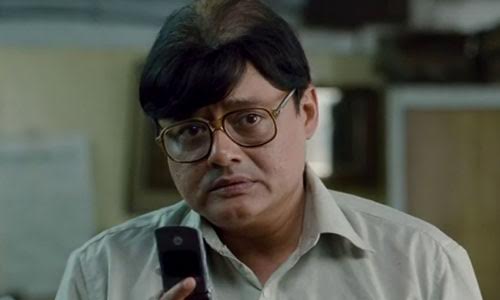 "My song, a parody of the Rabindrasangeet 'Bandh Bhenge Dao' in good humoured way gels with the mood of the satire which is basically an entertainer holding a mirror to ourselves and also aimed at tickling  the funnybones," the Ebar Shabor actor tells IBNS while recording the song.  The song is sung by the students of the school, which imparts training to empty one's wallet, during commencement of classes every day with topper Saswata leading the chorus.   "I had always been a bathroom singer. But enjoyed singing in different circumstances and situations. Never imagined will be singing as a student in petty crime institute where the track is sprinkled with words like churi, hatsafai and similar phrases," Saswata admits.  Saswata, Nilkantha Bagchi a.k.a Ritwik Ghatak in Meghe Dhaka Tara, had first sang in Anik Dutta's Aschorjo Prodip with Rajatava Dutta which was a rap song. Music Director Rajanarayan Dev smiles when asked about the experience to work with Apuda (Saswata) in both films.  "Apuda is a good friend. He cracks jokes and has no airs. And what counts most is his spontaneity. He has a ear for music and he offers useful inputs," the well known music composer,  having directed Saswata in both Aschorjo Prodip and now Mon Churi, said. Directed by Premashish Dey, his debut film, Mon Churi also stars  stand up comedian of Tollywood Biswanath Basu and versatile actor Kharaj Mukherjee, who is the Principal of the institute.  The film is produced by Eastern Entertainment.