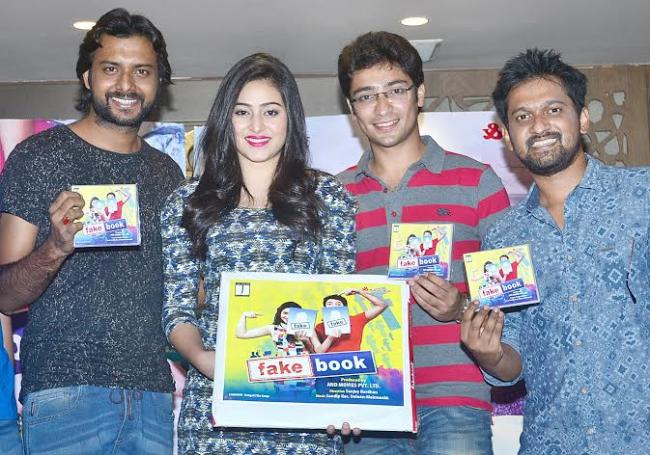 India Blooms News Service | | 07 May 2015, 03:57 pm
#Fake Facebook profiles are baggage of life, # Fakebook actress
Kolkata, May 7 (IBNS) Actor Ridhima Ghosh, a.k.a Satyabati in a popular TV channel's Byomkesh Bakshi who stars in Bengali flick Fakebook, affirms she is fed up with a number of fake profiles on Facebook.

"This is one thing which is very disturbing for anyone. To deal with fake profiles," Ridhima told IBNS at the music launch of the film "Fakebook".

"Many of my friends have informed me so about these fake profiles.Also I get friend requests and messages from unknown people. These things keep happening and you have to know how to tackle the situation. Fakebook  is all about that as well,,” the breezy ‘Rang MIlant’i and ‘Laptop’ actress said.

Gourab, the critically acclaimed actor in Apur Panchali, said to a question,”If we and Ridhima are cast repeatedly it is the producers and director’s call. Probably they have their reasons."

“Communication is very important between two important members of cast. Probably they have seen we can communicate better – (verbal or non verbal),” Gourab said.

Ridhima, who rates Durga Rahasyo of Saradindu Bandyopadhyay the best Byomkesh Baksi thriller for her as a reader, said, she finds it challenging to change herself in sync with the character contours for every role.”

“For instance as Satyabati I had to transform my look and dialect and postures to a woman of the 60s. It is always a challenge to pose as someone which you are not in real life. It remains the same for small or big screen. Here in Fakebook I become someone but the role is again so unlike me which I am not in real life. Every time to look believable is the biggest challenge for an actor,” she said.

In Fakebook, Ridhima’s character is wooed by Gourav’s character, Bhuto, who hails from a lower middle class household but is tempted  to create a fake image discarding his true self on social network being afraid of losing the woman in his life.

“This tendency of faking to impress other people is endemic which may invite disaster for a person’s life. Losing credibility and everything, including the woman in your life.  The story will have many takers. It teaches not to treat social networking site as a game,” Gourab, having done a string of films with director-duo Abhijit Guha-Sudeshna Roy, said.

“We are confident that FAKEBOOK will definitely hit a chord with today’s youngsters and we urge everyone to see the film not as an advisory about social media but as a complete family entertainer which incidentally refers to the pitfalls olf social media as a relevant issue,” Ridhima said.