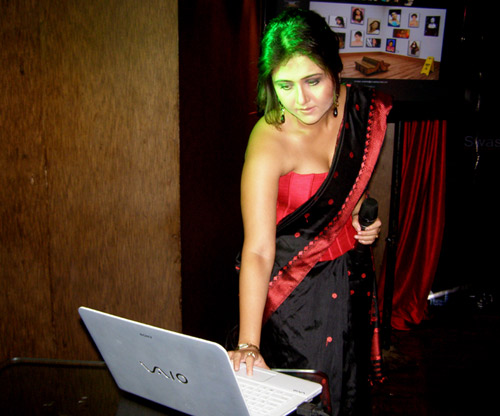 Comfort factor important to work with a director and we and Mainak vibe well: Swastika

Swastika, who had been part of a string of Moinak's film including real life MMS-clip inspired 'Take One', considers him as one of the rarest film makers having such a sensitive mind towards the issues confronted by women.

"I feel comfortable to work with Moinak as I can understand how he thinks about a scene and what he wants. It becomes easier when you work with someone like him. The way he looks at a subject in a sensitive way and not in a vulgar way," she said at the music launch of Family Album at Jadavpur University early this week.

About having any goosebumps for portraying a character who shared the most intimate terms with another girl (Paoli Dam), Swastika said, "Why should I. She is a special friend, a unique friend, but all of us a special friend in our lives. Every human being."

"It depends on how you portray a character," she said.

Swastika, who along with singer Somlata Acharyya and Anupam Roy, jammed before a young crowd of Jadavpur University students at the 'Happening' OAT fest venue (Open Air Theatre), gushed she revisited the old varsity days.

"The beaming faces, the young crowd and their energy level just takes you to another high. Me and Somlata have turned nostalgic," she said.

Also starring Bollywood 'bomb' Riya Sen, besides Ronodeep Bose, 'Family Album' is about individuals and human beings who have to constantly deal with the obstacle race called life and about the centrality of a family to cling to each other despite individual paths and crises, Mainak said.

The film is produced by Friends' Communication.